RNC: Trump paints Biden as a ‘radical’ candidate and a danger to America 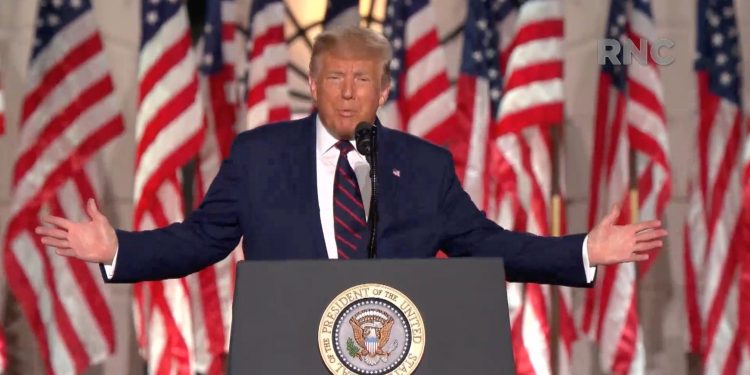 Against a backdrop of a global pandemic, heightened racial tensions, and widespread unemployment, Donald Trump framed his Democratic rival Joe Biden as the real danger to the country’s safety and economic welfare in his address to the Republican convention on Thursday.

Accepting the party’s presidential nomination ahead of November’s elections, Trump argued for more than an hour that his administration had accomplished everything it had set out to do and warned that a Biden presidency could be ruinous.

“This is the most important election in the history of our country,” Trump told an audience of around 1,500 supporters and officials on the South Lawn of the White House, raising concerns over the ethics of holding a political rally at the site, and over the apparent lack of social distancing measures.

“At no time before have voters faced a clearer choice between two parties, two visions, two philosophies, or two agendas.”

Trump went on to excoriate the Democratic party and argue that the choice for voters is between a “law and order” president who has a record of unmatched accomplishments, and a “socialist” opposition party and “radical” candidate eager to bring anarchy to the streets.

“Your vote will decide whether we protect law abiding Americans, or whether we give free reign to violent anarchists, agitators, and criminals who threaten our citizens, Trump said.

“And this election will decide whether we will defend the American way of ‘life, or whether we allow a radical movement to completely dismantle and destroy it.

“At the Democrat national convention, Joe Biden and his party repeatedly assailed America as a land of racial, economic, and social injustice,” Trump said. “So tonight, I ask you a very simple question: how can the Democrat party ask to lead our country when it spends so much time tearing down our country?”

Trump delivered his speech in front of a line of flags on a stage at the White House, a decision that raised questions over whether doing so would be violating the Hatch Act, which prohibits federal employees from engaging in political activity while on duty. Though the president is exempt from that law, government officials are not.

Trump’s remarks were the capstone of a night during which speakers focused on national security and policing, describing the country as rife with chaos and lawlessness in the streets because of Democratic leadership.

Speakers also repeatedly stressed that Trump was a longstanding friend of the African American community and minorities. Most speakers of color at the convention devoted significant portions of their speeches to stressing that Trump is not a racist.

Few mentioned the coronavirus pandemic, which has left more than 180,000 Americans dead and more than 5.8m infected, far more than any other country in the world. “If we had listened to Joe, hundreds of thousands more Americans would have died,” Trump claimed, ignoring widespread criticism of his administration’s response to the pandemic.

“I did what our political establishment never expected and could never forgive, breaking the cardinal rule of Washington politics,” Trump said. “I kept my promises.”

Trump has kept around half of his 2016 campaign pledges, according to Politifact. Earlier in the campaign cycle Trump struggled when directly asked what he would do if elected to a second term in office, but laid some plans out on Thursday.

Trump promised, if re-elected, to create 10 million jobs within the first year of his second term. He said more police would be hired and more judges appointed, and he promised to defend social security and protections for Americans with pre-existing conditions, despite his administration’s moves to weaken those programs during his current term.

He promised to reduce taxes and cut regulations “at levels not seen before”, adding: “We will fully restore patriotic education to our schools, and always protect free speech on college campuses.” He also said the country would land a woman on the moon, and “the United States will be the first nation to plant a flag on Mars”.

Trump delivered his speech amidheightened tensions across the country over the police shooting of Jacob Blake, a black man who was repeatedly shot in front of his children and left paralyzed by police in Kenosha, Wisconsin, on Sunday. The shooting has sparked another wave of anti-racism and anti-police brutality protests across the country.

Though the protests have been largely peaceful, Trump condemned “rioting, looting, arson and violence” that he said had taken hold in Democratic-run cities, but did not mention Blake by name.

Trump and his campaign have charged again and again that Biden is a “socialist” and liberal extremist who wants to defund police across the country and supports a government-run Medicare for All healthcare plan championed by the Vermont senator Bernie Sanders. Both are untrue, and Biden is seen as a moderate in the party.

Biden himself has pointed out that the dire picture Trump has described is actually what’s going on now, during his time in office.

Trump, Mike Pence, and other speakers have also argued that under Trump the economy has only improved, foreign terrorists have been defeated, and the coronavirus pandemic is an afterthought. But the US defense department says Isis has not been entirely defeated; tens of millions remain unemployed; and Covid-19 is still claiming hundreds of lives every day.

Ivanka Trump, the president’s daughter and White House advisor, gave the most effusive speech of the evening,.

“My father isn’t deterred by defeatist thinkers. The word impossible, well it only motivates him. Donald Trump rejects the cynical notion that our biggest accomplishments are behind us,” she said.

Giuliani, the former New York mayor, used his speech to paint a portrait of an America on the verge of anarchy, and accused New York current mayor Bill De Blasio of allowing protests and crime to spiral.

“Today, my city is in shock. Murders, shootings, and violent crime are increasing in percentages never heard of in the past,” Giuliani claimed. In reality, serious crime is down under de Blasio, the annual number of murders is around half the number it was under Giuliani.

In a taped speech, senate majority leader, Mitch McConnell, described Trump as his friend, and framed himself as a midwestern champion leading the defense of the Senate from Democrats.

“Today’s Democratic party doesn’t want to improve life for middle America,” McConnell said in the video, going on to say “we are the firewall against Nancy Pelosi’s agenda”.

Unlike most speakers this week, Trump’s housing secretary Ben Carson directly addressed Blake’s shooting, starting his remarks by saying “our hearts go out to the Blake family” before launching into a full throated defense of Trump on the African American community.

“Before the pandemic African American unemployment was at an all time low,” Carson said, in a somewhat misleading statement. “At this point in time President Trump is the man with the courage, the vision, and the ability to keep it shining brightly.”

The RNC has notably lacked some key party figures and the presence of the last Republican president, George W Bush. Meanwhile, Democrats’ convention included speeches by former Republican elected officials who have emerged as outspoken critics of the president.

On Thursday morning, aides to the previous two Republican nominees for president, the late John McCain and the Utah senator Mitt Romney, released statements endorsing Biden. The Biden campaign hopes that support will motivate moderates and Republicans to support the centrist Democrat.

Earlier on Thursday, the Democratic vice-presidential nominee, Kamala Harris, delivered a scathing rebuke of the Trump administration’s handling of the pandemic.

“The Republican convention is designed for one purpose: to soothe Donald Trump’s ego, to make him feel good,” Harris said. “But here’s the thing: he’s the president of the United States, and it’s not supposed to be about him. It’s supposed to be about the health and the safety and the wellbeing of the American people.”

Thursday night’s events ended with Trump and his family standing on the stage in front of the White House balcony listening to a band play Ave Maria, another norm-shattering piece of Trump’s convention.

Tags: US elections
No Result
View All Result