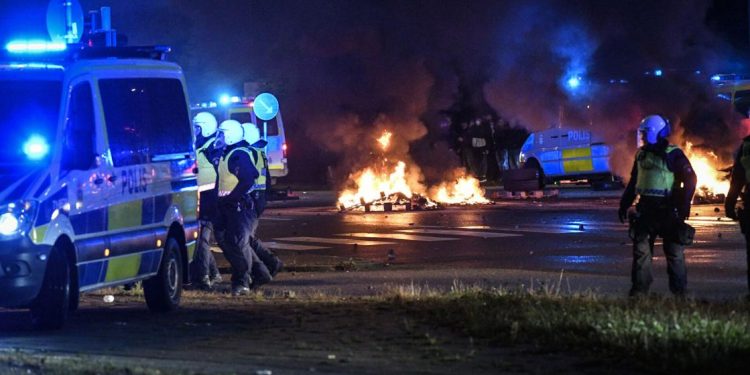 The disorderly phalanx of young men and teenagers, many wearing face masks and hooded tops, started to accelerate, excitement rising, as it neared the row of police vans blocking off the troubled district of Rosengård in Malmö.

“We’re gonna fuck this system up because they want to let a man burn the Qur’an,” one of them yelled, as the group starts hurling jagged chunks of concrete paving towards the armoured riot police sheltering behind the vans. “And we’re gonna fuck the police.”

More than 300 rioters threw stones at police and burned tyres in the southern Swedish city on Friday night after a video circulated of followers of the far-right Danish politician Rasmus Paludan burning a copy of the Qur’an near one of the city’s mosques.

Crowds of young men wielded bars taken from street signs and metal barriers, and threw stones and fireworks after smashing up bus shelters. Further up the road, cars, tyres, pallets and rubbish bins were set ablaze.

Police in Malmö had vacillated for two weeks over whether to give Rasmus Paludan, the leader of Denmark’s extremist Hard Line party permission to hold an anti-Islamic protest. Permission was denied on Wednesday, Paludan was stopped in a car on Friday afternoon as he left the Öresund bridge, deported and banned from entering Sweden for two years.

But this did not stop his supporters from filming themselves burning one copy of the Qur’an, and kicking another around Malmö’s main square like a football, for which three of them were arrested on suspicion of hate crimes.

During the riot, Samir Muric, a prominent Malmö imam, paced up and down in the space between the police and the rioters, imploring the rioters to stop and accusing them of shaming their own religion. Muric, who was dressed in a jubbah, has also condemned the rioters on his Facebook page. “Those who are acting in this way have nothing to do with Islam,” he wrote. “Their shouts filled with ‘la ilaha ill Allah’ and ‘Allahu Akbar’, are just outbursts that they do not mean, because if they really meant them, they wouldn’t have acted like this.”

Among the spectators, it was clear that many of the Muslims and Arabs among them opposed the riot. “I don’t like this, because the Arabs, they’re fucking things up for our community here in Sweden, because one Danish man burned a Qur’an,” complained one man, who grew up in Malmö to Lebanese parents. “And this is what he wants. They want us to be like this. I’ve never seen this ever in my life. I’m shocked.”

Another young man, blocked from returning to his home in Rosengård at the end of a 10-hour shift, struggled to contain his frustration:“A maximum of five of them are Muslim. You know why? Because a real Muslim doesn’t do this. All religions, not only Islam, are about peace.”

Throughout the night, police held their position at the crossroads marking the dividing line between Rosengård and central Malmö, pushing the rioters back with a series of charges.

“Look at them, they can’t fight back fire with fire, that doesn’t work!” a young man, who called himself “the Somali pirate of Rosengård”, hooted in a strong north London accent. “They’re violating our civil rights by letting other people burn the Qur’an that we believe in and now we have to show that they can’t do that. It’s against us, so we’re against them. That’s how simple it is.”

Police officers tried to control the situation by explaining their earlier arrests. “The police did not give them [the far-right activists] permission to do anything,” one officer assured a small but angry crowd gathered around him. “We arrested him as soon as a film came out on the internet showing they had burnt a Qur’an, and we arrested several of the others.”

According to Patric Fors, a press spokesman for the Malmö police, calm had not returned to the area until about 3am on Saturday: “A few policemen have been slightly injured, and I don’t have any reports of any members of the public being injured. We currently have 13 suspects wanted for rioting, five of them have been arrested, but they have all now been released.” The Sydsvenskan newspaper reported that 15 people were held overnight on Friday.

Many witnesses expressed their worries about how the Qur’an-burning and the angry reaction to it might change the city.

Amar Mohsen, an 18-year-old whose mother is Russian and whose father is Iraqi, said politicians in the city should have done more to condemn the plans to burn the Qur’an. “The politicians in Sweden say: ‘It’s a human right. Do what you want. You live in a free country. You can burn a Qur’an in front of a mosque’. It’s not like that. It will affect many people and I think we will be more divided.”