Rhetoric escalates in Turkey’s response to Macron on Islam 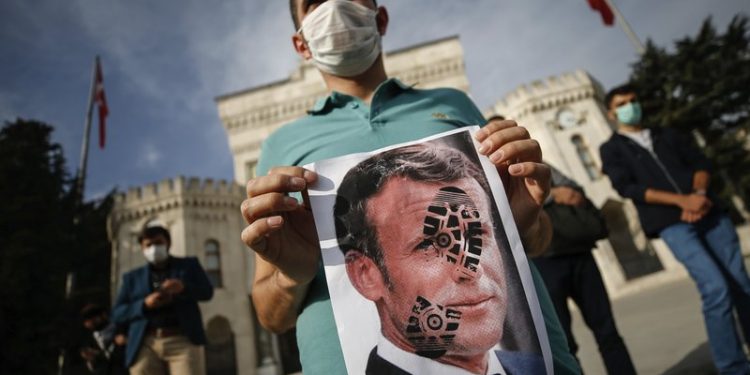 Erdoğan called for the boycott after accusing France’s President Emmanuel Macron of having a problem with Muslims and expressing his belief that Macron has mental health issues. In response, France recalled its Ambassador to Turkey Hervé Magro.

Erdoğan asserted that France has an anti-Islam agenda and called on EU leaders to pressure France to change it. Nonetheless, EU leaders expressed solidarity with France, with the High Representative of the EU for Foreign Affairs and Security Policy Josep Borrell rebuking Erdoğan for unacceptable comments and urging him to stop fueling tensions.

On Monday, EU foreign affairs spokesman Peter Stano did not rule out an emergency meeting of EU ministers at an earlier date in the wake of Erdoğan’s comments. The EU expects Turkey to revise its position, Stano said, adding that EU member states will decide whether to take action soon or wait until December.

Italian Prime Minister Giuseppe Conte described Erdoğan’s remarks about Macronde as unacceptable, pointing out that personal insults did not help the positive agenda that the EU seeks to pursue with Turkey. He expressed full solidarity with Macron.

Earlier this month, Macron announcing a firm stand against Islamist separatism, warned that its adherants threatened to take over some Muslim communities in France.

In the following days, an Islamist extremist beheaded French teacher Samuel Paty for displaying cartoons of the prophet Muhammad in a class on freedom of expression. Macron stressed that Paty was a hero who represented free-thinking French values, which include the freedom of expression right to satirize everything, including religion.

French authorities have conducted dozens of raids since the murder of Paty, with several suspected Islamic radicals under arrest and some 50 organisations allegedly linked with radicalism earmarked for closure. In the last five years or so, jihadists have killed more than 240 people in France, prompting the country to take a hard look at its core values, especially freedom of expression, and the threat posed to them by Islamic extremisam.