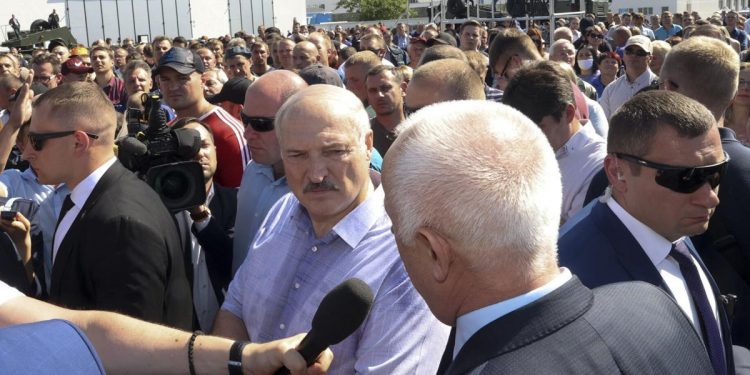 Alexander Lukashenko’s grip on power in Belarus has taken a further hit, as workers heckled him during a visit to a factory on the outskirts of Minsk.

The visit to the the state-owned MZKT military vehicles factory on Monday was meant to show the Belarusian president was still in control and retained the support of workers at the vast factories that are the backbone of the country’s neo-Soviet economy, a day after the biggest rally in the country’s recent history against his rule.

Instead, leaked video and audio from his speech to selected workers at the factory showed him being met with shouts of “Resign!” Lukashenko looked shaken but carried on speaking, as people yelled “liar!”. The president arrived at the factory by helicopter, presumably because of safety concerns.

In a defiant speech, he told the crowd that he would not consider a rerun of last week’s tainted elections.

“You are talking about unfair elections and want to hold fair ones,” he told the crowd, which yelled “Yes!” in response. “My answer to you is: we held elections, and as long as you don’t kill me, there won’t be any other elections.”

As a concession, Lukashenko repeated an offer to amend the constitution to reduce his presidential powers, adding he would not enter that process “under pressure or through the street.”

But his main thrust was to justify his strict rule and the police brutality of the past week, saying he was defending the country from chaos. “Yes, I am not sacred,” he said. “You know my cruelty. You know if not my cruelty, there would be no country.”

Lukashenko, who has ruled the country for 27 years, has suggested the protests against him are organised and funded by shadowy foreign forces, and has asked the Russian president, Vladimir Putin, to intervene.

In another video, Lukashenko appeared to threaten a group of striking workers. “Don’t worry, I won’t beat you, it’s not in my interests,” he said as he approached the group. “But if one of you provokes me, I’ll deal with it cruelly. Be a man. There’s a whole crowd of you here and I’m only all alone. Put your phone down!”

The Kremlin has said Moscow is ready to provide help in accordance with a collective military pact if necessary, but Putin has stopped short of offering support or an endorsement of Lukashenko, whose grip on power looks shakier by the day.

The Belarusian opposition has called for a general strike from Monday, to continue the momentum after the massed protests on the weekend. The strike is expected to extend to oil refineries and fabric and fertiliser manufacturers, as well as state television, where reporters have complained about being blocked from covering the country’s unprecedented protests.

The demonstrations flared in the aftermath of the contested presidential election last Sunday, in which Lukashenko declared victory and then launched a violent police crackdown against protesters during which there were more than 6,700 arrests and widespread reports of violence and torture by riot police.

In a video statement on Monday, Svetlana Tikhanovskaya, the opposition leader in exile, said she was ready to become the country’s “national leader”, claiming victory in last week’s presidential elections and calling on police to “come over to the side of the people”.

Tikhanovskaya left Belarus for Lithuania last week under pressure. Her husband remains in jail in Belarus. Officially she only won 10% of the vote to Lukashenko’s 80%, but few people in Belarus or beyond believe the vote was fair.

She said in the statement: “I am ready to take on the responsibility and serve in this period as a national leader so that the country calms down, returns to a normal rhythm, so that we free all political prisoners in the shortest possible period and prepare … for new presidential elections.”

A number of western countries have strongly criticised Lukashenko, and the EU is drawing up new sanctions on the country. On Monday, the UK foreign secretary, Dominic Raab, tweeted: “The violence against peaceful protesters in Belarus is appalling. The UK does not accept the results of this fraudulent presidential election & calls for an urgent investigation through @OSCE into its serious flaws & the grisly repression that followed.”

On Sunday, columns of demonstrators raised victory signs and held flowers and balloons as they gathered in the square, the focus of peaceful demonstrations in recent days. There were large rallies in other large towns and cities across Belarus.

A lot may now depend on the reaction of Russia. The Kremlin said in a call with Lukashenko, Putin had expressed Russia’s “readiness to provide the needed assistance” including “if necessary” through the CSTO military alliance between six former Soviet states.

Russia has not sent any military aid to Belarus in response to the recent protests, at least publicly. Analysts have said military intervention would be extremely risky.

“I see a Russian military intervention in Belarus a complete and utter disaster, and strongly hope that it will be avoided,” said Dmitri Trenin, the director of the Carnegie Moscow Centre.