Report from the endless queue for Ukrainians: ‘Left to our fate’ 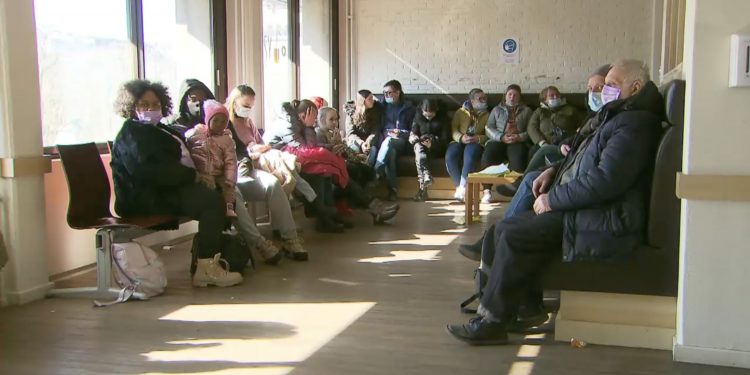 BRUSSELS (Brussels Morning) – The old Jules Bordet hospital on Waterloolaan, which has been converted into a registration centre, is receiving more Ukrainian refugees every day. Most of them are looking for shelter and all want to apply for a temporary residence permit. Although everyone in line left their lives in Ukraine, the stories are very different.

From afar, a long line appeared at the old Jules Bordet hospital, with hundreds to a thousand people in it. At the entrance of the building there was a second, shorter row, consisting of pregnant women, women with buggies and young families.

Many helping hands ready to offer help to as many waiting as possible. Several volunteers were ready to provide food for everyone. Plenty of sandwiches were being made, pasta sauce was being distributed and soup was being poured out. Families offered their homes to receive refugees along the row. Everyone talked to everyone, strangers shared their experiences and found support in each other. The constant buzz was drowned out by helpers who loudly offered tea, coffee and water.

The moving crowd of helpers contrasted with the waiting crowd that didn’t move an inch. For many it was not the first day that they sat there.

Children tapped the fences nervously, played football or carried around food and drink. Entire families had been waiting patiently for hours. Among them is Elena Skorkina. Her two youngest children play with the other children.

‘Left to our fate’

Charbel Bassil (42) noted that the reception was arranged a little better every day. Extra guidance and the installation of fences had brought some more order to the chaos. However, he did not understand why a queue cannot be set up via the website. Then you can deal with each case in a fairer order.

“I certainly understand that pregnant women and children are given priority. They can’t stand here that long. But it’s just inhumane how much the rest of us are left to our own devices,” Charbel says, shaking his head.

Not only the refugees felt abandoned, also some helpers. Rudy and his wife Mia were encouraged by their municipality of Merchtem to open their house. “We applied and took in a family almost immediately. But we haven’t received any guidance since then.” In the past, organisations from civil society also pointed to the need for good support from the government.

The Ukrainian family must first register in Brussels before they can look for a home or work in Merchtem. Frustrated, Mia says that something urgently needed to change. “We certainly don’t regret doing this and don’t want to backtrack. But I just don’t know how long it will remain a sustainable situation. Our house is not made for two families, we are on top of each other. Something really needs to change from the government, because nobody can keep up like that.”