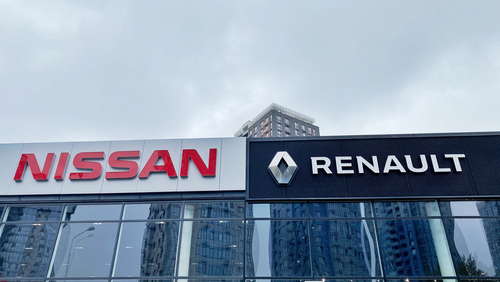 Belgium (Brussels Morning Newspaper) The French carmaker Renault announced on Wednesday that it is suspending production at its Moscow factory, after a plea by Ukraine’s President Volodymyr Zelenskyy that French companies end their Russian operations.

Addressing French lawmakers on Wednesday, Zelenskyy urged Renault and other French companies to “stop being sponsors of Russia’s war machine”. Ukraine’s Foreign Minister, Dmytro Kuleba, had called for a global boycott of Renault.

Renault did suspend its operations in Russia following its invasion of Ukraine, but the move was ostensibly prompted by logistics and supply difficulties stemming from western sanctions being imposed on Moscow.

This week, Renault was among a handful of international businesses that decided to restart their operations in Russia, despite the sanctions and international condemnation of Moscow. However, the company reversed its decision yesterday, releasing a statement that it has suspended activities at its Moscow manufacturing plants. Renault stressed that it was already implementing necessary measures to comply with international sanctions.

The company added that it was looking at “available options”, when it comes to its business partnership with Russia’s largest carmaker, AvtoVAZ. The French company currently holds a 69% stake in the Russian carmaker, making Renault significantly more vulnerable to the Russian market than its competitors, most of which have already exited Russia.

According to Citibank analysts, the Russian market accounts for up to 8% of Renault’s global earnings. In its Wednesday release, Renault noted that it was looking “to act responsibly” towards its 45,000 employees in Russia.

One consequence of suspending production in Russia is that Renault has downgraded its financial outlook for 2022, announcing that its group operating margin will now be closer to 3%, compared to previous estimates of at least 4%.