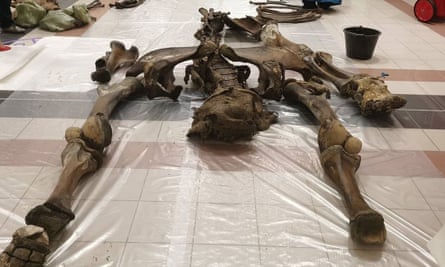 Russian scientists are poring over the uniquely well-preserved bones of a 10,000-year-old woolly mammoth after completing the operation to pull them from the bottom of a Siberian lake.

Experts spent five days scouring the silt of Lake Pechenelava-To in the remote Yamal peninsula for the remains, which include tendons, skin and even excrement, after they were spotted by local residents. About 90% of the animal has been retrieved during two expeditions.

Such finds are happening with increasing regularity in Siberia as climate change warms the Arctic at a faster pace than the rest of the world, thawing the ground in some areas long locked in permafrost.

The woolly mammoth will probably be named Tadibe, after the family who discovered the adult animal, which is thought to have been a male between 15 and 20 years old, and and about 10ft (three metres) tall.

Andrey Gusev from the Centre of Arctic Research, said the preservation of the animal was unique, with the lower spine still connected by tendons and skin, but that the retrieval operation was painstaking because the remaining bones were jumbled up.

“We assumed that the bones were preserved in the anatomical order. But the first and the second days of our expedition showed that it was true only about the back part of the skeleton,” he said. “The rest of the bones were in such chaotic order that it was impossible to guess where they were.”

Evgenia Khozyainova from the Shemanovsky museum in Salekhard, said: “We have one front and one hind foot well-preserved, with tendons, soft tissues and pieces of skin. Also we have sacrum with adjacent vertebrae, including the tail preserved with tendons and a big piece of skin.”

Of particular interest is the excrement, or coprolite, because it will contain details of the animal’s diet, as well as pollen and other environmental clues.

The cause of the mammoth’s death is not clear yet as no signs of injuries were found on the bones.

Researchers have found mammoth fossils dating from up to 30,000 years ago in Russia.

Scientists circulated images in December of a prehistoric puppy, thought to be 18,000 years old, that was found in the permafrost region of Russia’s Far East in 2018.