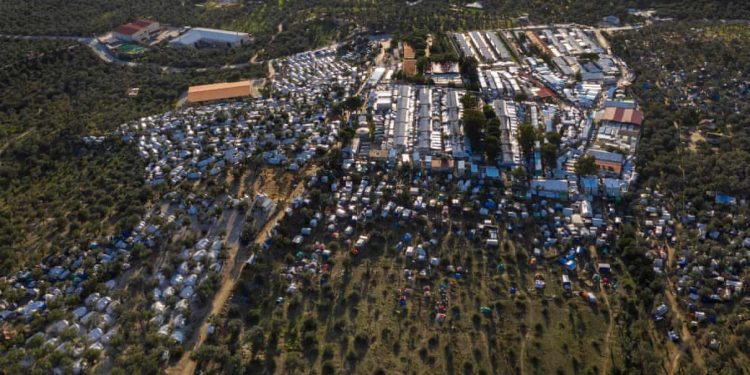 The first recorded coronavirus case in Moria refugee camp on Lesbos, where just under 13,000 people are living in a space designed for 3,000, has led to fears that the government will use the pandemic as a pretext to create closed camps.

Notis Mitarachi, the minister for migration, told local news that the coronavirus situation demonstrated the need for “closed and controlled” structures. The migration ministry also released a statement on Thursday, which said that plans to create closed structures on the islands of Lesbos and Chios were progressing.

On Wednesday, a 40-year-old man, a recognised refugee from Somalia, tested positive for Covid-19. The camp is now under a strict two-week quarantine and police monitor entrances and exits.

Since the outbreak of the pandemic there have been calls by NGOs for the evacuation of overcrowded Aegean island camps where social distancing is impossible. In Moria, most people live in cramped conditions outside the official perimeters of the camp often in thin tents or makeshift huts.

Greece, which had success in flattening the curve at the outbreak of the pandemic, has experienced a rise in cases since the country opened up to tourism in July. Rights groups have drawn distinctions between the differing attitudes shown towards tourist and refugees: as holidaymakers have taken to the country’s beaches, refugees have remained locked down since 23 March.

Caroline Willemen, the MSF project coordinator for Covid-19 on Lesbos, said she was concerned not only about the impact of the virus but also the plans for closed centres.

“There have been statements that if only Moria was a closed structure, this would never have happened, which is extremely questionable,” she said. “The person who was found to be positive reportedly came back from Athens, but that’s only one of many ways in which sooner or later Covid would have reached Moria. It’s a very cynical approach and it’s really using the pandemic as an excuse to supplement further restrictions that are not justified from a public health point of view.

“[Moria] has always been a horrendous place to live. Then if you take away people’s limited possibility to at least leave the camp a few hours per day, I think the mental health impact of that especially will be enormous.”

“Closing the camps [and] sentencing tens of thousands of people [to] permanent quarantine is not a solution,” said Mariana Gkliati, a researcher in human rights at Leiden University. “Covid-19 is used as an excuse all around the EU to intensify already existing trends of securitisation and the further closing of the borders.”

In Moria, camp residents are now facing two weeks of quarantine whilst they watch and wait to see if the virus spreads. Mustafa Nadri, 23, who is from Afghanistan and part of the Refocus Media Labs citizen journalism programme on Lesbos, said he felt disillusioned with the Europe he was witnessing.

“I was thinking that Europe is the land of freedom, but I’ve seen the opposite of it by now,” he said. “We’re here as a result of their own political decisions, which led my country towards civil war and poverty. No one would leave their home unless their home isn’t safe, unless their rights as humans aren’t valuable anymore. Why aren’t ours?

“We came to Europe to seek shelter, but they keep us in these camps, even in the middle of a pandemic.”

Hanne Beirens, director of the Migration Policy Institute Europe, said coronavirus was not a credible reason for creating closed centres. “EU asylum law says you cannot detain an asylum seeker just because of the reason he or she is an asylum seeker,” she said. “If there are considerable grounds to detain the person, it has to be based on an individual assessment.”

“This resembles what is happening in the US and Mexico, where the government is using public health concerns as a reason for deviating or breaching laws,” she said. “I’ve spoken to many people who work in [asylum seeker] reception centres across Europe and it’s the opposite: rather than detaining or closing a centre, it’s more about we want to make sure that we have more space.”

“The European commission has also issued guidelines in the spring on how to implement European asylum law in a situation of Covid. It doesn’t say anywhere there that the response is to detain people and put them in closed centres.”

George Koumoutsakos, the alternate minister for migration policy, said the centres would not be closed but “very well controlled” and residents would not be able to leave during the night. “We’re a democratic country – we’re not building prisons,” he said. “Now with the pandemic we have an additional important reason to better control the entrance and the exit from the camps.” It had not yet been decided, he said, for how many hours each day people would be able to leave.