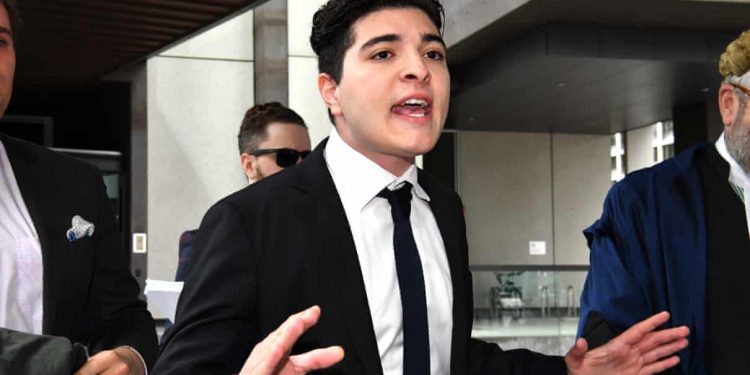 Legal action by a student activist suing China’s Brisbane consul-general has been dismissed, with a magistrate ruling he has diplomatic immunity.

Drew Pavlou made an application under Queensland’s Peace and Good Behaviour Act, complaining that Xu Jie had incited violence against him.

The complaint followed a protest at University of Queensland during which Pavlou was allegedly assaulted twice, his barrister, Tony Morris QC, told Brisbane magistrates court on Monday.

Xu issued a press release after the confrontation, which Morris said incited violence against Pavlou.

The release referred to “a small number of people with ulterior motives” carrying out anti-separatist China activities at the University of Queensland.

The release said the action caused “indignation and protest from overseas Chinese students”.

Xu was issued a summons in response to Pavlou’s complaint, but failed to appear in court or send a legal representative.

Instead, the Department of Foreign Affairs and Trade wrote to the court saying Xu was entitled to immunity because he is a consular employee.

On Monday the magistrate, Janelle Brassington, dismissed Pavlou’s application after ruling Xu had immunity because he was performing the functions of a consular officer.

Brassington said she was satisfied the release was issued “in the exercise of his consular function”.

As a result, it did not fall under the court’s jurisdiction.

Outside court, Morris told reporters the law had been applied fairly and impartially.

“All Drew and his supporters have been trying to do is to secure for the people of Hong Kong that same benefit – the benefit of courts that … decide cases on the basis of law and the evidence, rather than what their masters tell them to,” he said.

The outcome meant the alleged “misconduct of the Chinese consul-general” was not an issue to be decided in court, Morris said.

“It’s a political issue to be decided by Australia’s Department of Foreign Affairs.”

Pavlou was suspended in May from the University of Queensland following a disciplinary hearing that examined misconduct allegations reportedly linked to his on-campus activism supporting Hong Kong and criticising the Chinese Community party.

Xu is also an adjunct professor at the university.