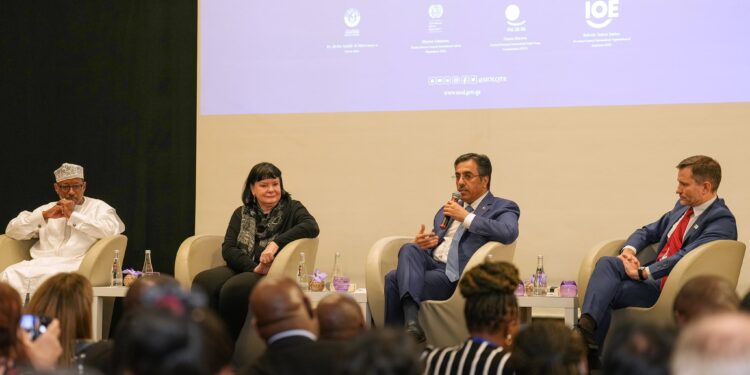 Geneva, (Brussels Morning Newspaper) Qatar showcases reforms during the International Labour Conference, which the Qatari Ministry of Labour organized. The international media criticized Qatar for not being eligible to host the FIFA world cup.

This event has significance because it may pave the way for Qatar to successfully host the mega event. Qatar presented its progress in workers’ welfare and labour rights in front of some prominent organizations.

Moussa Oumarou, the ILO’s Deputy Director-General for Field Operations and partnerships, said he believed that the modernization of labour legislation improved working conditions in Qatar.

He said, “ We want to progress in labour reforms to create a positive image for Qatar beyond the world cup.”

Sharon Burrow, ITUC General Secretary, said, “ the labour laws are not just an agreement, they are in legislation, and there is a system of compliance, the labour courts.”

He added, “ The system of modern slavery kafala is dead, there are labor laws, there is progress, even domestic workers in the country do not face any discrimination.”

The program was conducted by MADLSA and ILO, in which a total of 71 QVC staff were trained to provide accurate information on the rights and responsibilities of workers in Qatar. And to explain the terms and conditions of an employment contract to workers.

To share the findings of the impact assessment of the fair recruitment pilot conducted by MADLSA and the ILO in the construction sector, the program has been engaged in various Knowledge sharing initiatives, including with employers.

In March 2021, Qatar’s first non-discriminatory minimum wage came into force after six months, applying to all workers regardless of their nationality and occupation,  including domestic workers.

In May 2021, the Government adopted new legislation to further protect workers from heat stress. The main provision of the ministerial decision was to increase the period when outdoor work is prohibited during the summer.