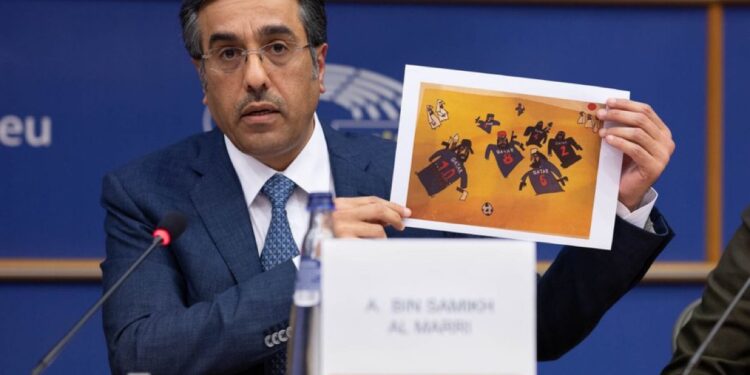 Belgium, (Brussels Morning Newspaper) Conditions for foreign workers in Qatar ahead of the FIFA World Cup were today the main topic of discussion on the European Parliament’s Subcommittee on Human Rights. The MEPs discussed conditions of migrant workers reforms and latest changes Qatar adopted with the guest, Qatar Labour Minister.

The hearing was organised in association with the Delegation for relations with the Arab Peninsula: World sport events and human rights in the context of the upcoming FIFA World Cup 2022 in Qatar, in the presence of: Ali Bin Samikh Al Marri, Minister of Labour of the state of Qatar; Max Tuñón, Head of the International Labour Organization Office in Doha; Tim Noonan, Director of Campaigns and Communications, International Trade Union Confederation (ITUC); and Minky Worden, Director of Global Initiatives at Human Rights Watch

The Qatari minister defended the record of his country and considered it as “substantial” and first of its kinds in the region. The minister added that Qatar World Cup made his country a target for many smearing campaigns and false propaganda attacks where numbers are exaggerated and slammed many media reports as “slanderous” and inaccurate where they publish wrong statistics and accounts.

When Qatar was elected in 2010 to host the 2022 World Cup, many eyebrows were raised. A desert nation was not seen as the ideal place for a popular sporting tournament, even if the country was ready to pour billions to guarantee the best championship ever.

The country defended its election and wants to dispel any doubts about how sustainable its championship will be. Even more, it is ready to teach others how to do it. Over 90% of Qatar’s workforce are migrants, of which one million work in construction. Although the country has introduced several labour reform measures in the last few years, for instance introducing a minimum wage and allowing workers to change jobs without needing permission from employers, migrant workers in Qatar still face harsh, and sometimes fatal, conditions.

In the discussions today in the Subcommittee, It expressed there is still a concern about the situation of migrant workers in Qatar, including long working hours, hazardous working conditions, going unpaid for months, having their passports confiscated, being forced to live in overcrowded camps, being denied the right to form unions, and having no access to free drinking water in extreme heat.

Marie Arena a Belgian politician who has been serving as a Member of the European Parliament stated that in a few days will have to look at the world of football and at the same time the world of human rights in Qatar. The MEP lauded Qatar’s labor reforms, stressing that the country must continue its efforts to ensure sustained growth in human rights

“Various Human Rights organizations have spoken out against the conditions in Qatar for the foreign workers that have worked in construction sites in the country ahead of the tournament. There are reports of discrimination against the nationalities of workers in Qatar as well as accidents and the construction yards. Since 2018, many reforms have been adopted with the impetus of the Qatar National Human Rights Committee and the action of the Minister of Labour, H E Dr. Ali bin Smaikh Al Marri. These include the abolition of the Kafala system, workers’ mobility, the introduction of the minimum wage, workplace health and safety mechanisms, the creation of a social fund, the establishment of collective bargaining arrangements, and more. These reforms are important, but they need to be correctly implemented, evaluated, and followed up, which is why we welcome the International Labour Organisation’s engagement as a partner in implementing these reforms” stated MEP Arena.

MEP Hannah Neumann said that the case of Qatar shows that when there is international pressure on human rights violations the situation can be improved.

On the other hand, Qatari Labour Minister Mr. Ali Bin Samikh Al Marri said that before being a minister, he worked for years in organizations that fight for human rights he knows the importance of the topic and he realizes the challenges of how to improve the situation.

“The reforms for human rights will not stop when the cameras are turned off after the World Cap it will continue because they are a part of the Qatar National Vision 2030 (QNV2030) is a master vision and roadmap towards Qatar becoming an advanced society capable of sustainable development that can improve in every significant topic, “said Al Marri.

He added that recently he had a meeting with the Director-General of the International Labour Organization (ILO) Gilbert F. Houngbo, in Geneva, and during the meeting, the progress was noticed in the continuous technical cooperation program between the ILO and Qatar.

“The progress made during the program so far includes the adoption of new legislation and regulations related to the labor sector, as indicated in the latest ILO report issued earlier this period,” said the minister.

The minister added that the campaign against Qatar turned from “criticism” to “racism” whereby false allegations, statistics and propaganda is being pushed through headlines across leading world media.