Putin offers to help Europe with its gas problems 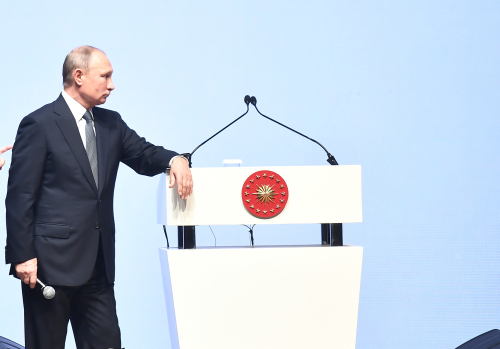 Brussels (Brussels Morning) Russia’s President Vladimir Putin told an energy conference in Moscow that his country stands ready to boost its supplies of gas to Europe if asked, dismissing suggestions that the Kremlin might be using gas as a weapon in its dispute with the West.

Commenting on the ongoing gas squeeze in Europe, which put the Union’s dependence on Russian gas squarely in the spotlight, Putin remarked that the gas market is neither balanced nor predictable, particularly in Europe. The Russian leader made a point of stressing that his country is meeting all of its contractual obligations, and that it is standing by, ready to increase deliveries on demand.

He dismissed outright the assertion that he is using gas as a power play in Moscow’s dealings with the EU, saying “this is just politically-motivated chatter, which has no basis whatsoever.” Russian gas accounts for about a third of Europe’s supplies. Some European politicians claim that Putin is not pumping enough.

The global energy crisis is squeezing the markets and pushing up prices for oil, gas and coal, causing a ripple-like effect that is adding inflationary pressure to all goods and services that are dependent on fuel and energy.

An added complication in the European-Russian relations is the issue of the Nord Stream 2 gas pipeline, which is set to double the gas supply delivered to Europe through the Baltic Sea. A number of EU countries oppose the Russian-German project, fearing it would further increase the Union’s dependence on Russian gas, while leaving Ukraine literally out in the cold, diminishing its importance as a gas transit country and enabling Moscow to circumvent it in its ongoing dispute over the eastern Ukrainian region of Donbas.
EC President Ursula von der Leyen and European Council President Charles Michel visited Ukraine on Tuesday, pledging future aid to Ukraine should its pipelines run dry, while also stressing that the EU is exploring alternative means of securing a gas supply for Kiev.