Putin meets Lukashenko in a show of support 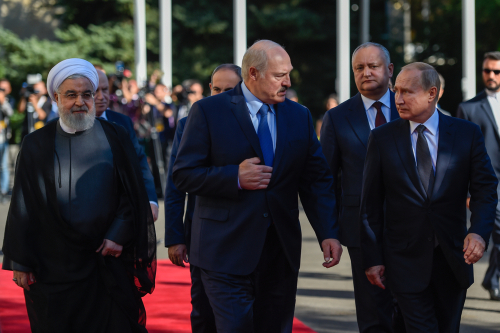 Brussels (Brussels Morning) The authoritarian President of Belarus, Alexander Lukashenko,   meets Russian President Vladimir Putin in the Sochi today, a move interpreted by most analysts as a show of support by Putin for his close ally in the face of mounting EU sanctions against Belarus.

Lukashenko was roundly condemned by Western countries after forcing a commercial Ryanair flight en route from Greece to Lithuania to land in Minsk over a false bomb threat, which was followed by the arrest of two passengers, dissident Belarus journalist Roman Protasevich and his companion Sophia Sapega.

The EU has responded fast by closing the bloc’s airspace to all Belarus flights and by urging all European carriers to avoid Belarus airspace, while also pledging to introduce further economic sanctions against the country soon.

The Putin-Lukashenko meeting comes as Moscow showed signs of pushing back against the EU blockade of Belarus airspace by denying European planes on flight paths circumventing Belarus the right to enter Russian airspace.

An Austrian Airlines flight was turned back on Thursday after Russian air traffic control refused to approve a route change which evaded Belarus. An Air France flight from Paris to Moscow was likewise cancelled for the same reason. The Kremlin has denied that these actions represent official policy, insisting the responsibility lies with the civil aviation authority.

In a late-night meeting of the EU Foreign Affairs Council, High Representative Josep Borrell and member state foreign ministers discussed possible sanctions that could be introduced against Belarus, aiming primarily for economic sanctions, but likely excluding the country’s natural gas deliveries to Europe.

The Foreign Ministers of G7 countries also issued a joint statement on Thursday, condemning the “unprecedented” actions of Belarus, calling for the immediate release of Protasevich and all political prisoners, and pledging further sanctions against the country.