Putin and Biden to continue talks on Ukraine 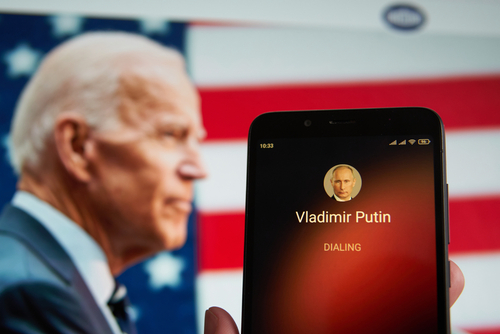 Brussels (Brussels Morning) Russia’s President Vladimir Putin and his US counterpart Joe Biden are to continue talks as tensions rise over the build-up of Russian troops near Ukraine.

Putin indicated that he would like an in-person meeting with Biden as they continue to discuss how relations between the West and the East have reached their lowest point in the last 30 years, according to Sunday’s coverage by Reuters.

The Kremlin noted that the two leaders agreed to continue talks during their virtual meeting last week, where Biden warned Putin against attacking Ukraine and Putin urged NATO to guarantee it would not expand eastward.

He added that Putin had told Biden that the Russian troops deployed near Ukraine are on Russian territory, assuring the US President that they do not present a threat to anyone.

The G7 is planning to warn Russia against aggression towards Ukraine, according to a draft statement seen on Sunday by Reuters.

While US intelligence warns that Russia could be preparing an attack against the Ukraine, Moscow rejects the accusation as an attempt “to further demonise Russia and cast it as a potential aggressor.”

At their meeting in Liverpool last week, G7 leaders condemned the build-up of Russian troops near Ukraine, calling on Moscow to de-escalate the situation.

In the draft statement, they stressed that “Russia should be in no doubt that further military aggression against Ukraine would have massive consequences and severe cost.”

“We reaffirm our unwavering commitment to Ukraine’s sovereignty and territorial integrity, as well as the right of any sovereign state to determine its own future”, the statement said.

“We call on Russia to de-escalate, pursue diplomatic channels and abide by its international commitments on transparency of military activities”, the  G7 leaders concluded.

The G7 comprises Canada, France, Germany, Italy, Japan, the UK and the US, as well as an EU representative.