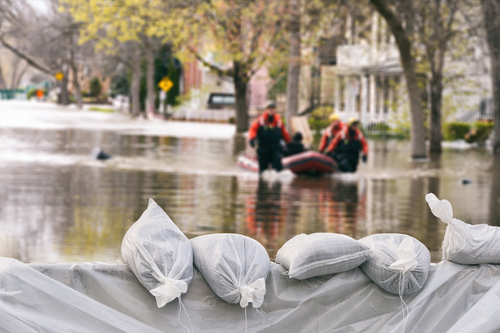 Flood Protection Sandbags with flooded homes in the background (Montage)

Brussels (Brussels Morning) More than 200 people have been pronounced dead in the aftermath of the extreme floods that swept through Germany and Belgium.

Faulty public warning systems in the EU are at the centre of a surge of criticism, following reports that, had the overall system functioned properly, lives could have been saved from the deadly floods.

Meanwhile, efforts continue to clean up the wreckage left behind, while search and rescue operations remain ongoing in hopes of finding missing people.

According to the Copernicus Emergency Management Service, more than 25 warnings were sent about specific regions of the Rhine and Maas river basins in the days leading up to the flooding.

The warnings were sent through the European Flood Awareness System (EFAS) before the onset of the heavy rains that triggered the flash flooding, yet they weren’t able to avert the catastrophe that ensued.

According to the Times, Germany knew that the floods were coming, but the warnings didn’t work.

Jeff Da Costa, a PhD researcher in hydrometeorology at the University of Reading in the United Kingdom said there was “clearly” a serious breakdown in communication, and that this had cost many lives.

In Germany, the issue of the floods and their handling has become increasingly politicised with elections looming in September. Debates on how to increase preparedness against natural disasters are squarely in the spotlight, as is the contention that the floods and the havoc they have caused can be directly linked to climate change.

“We have to hurry up, we have to up the pace in the fight against climate change,” Germany’s Chancellor Angela Merkel said yesterday while visiting the small town of Schuld in Western Germany, one of the hardest-hit areas.

In Belgium, Daniel Bacquelaine, the mayor of Chaudfontaine, province of Liège, confirmed to local press that a new provisional toll of 36 deaths was registered today. The number remains provisional because more than 100 people are still presumed missing.

“The missing are mostly people who have not been heard from, who may have left the town just before the floods or even during them,” Bacquelaine noted.

In the meantime, the EU Space Copernicus Emergency Management Service has been fully activated for Germany and Belgium. Radar data from the EU’s Sentinel1 is being used to map flooded areas to provide support to first responders.

The Commission’s Civil Protection and Humanitarian Aid department announced that, so far, more than 170 rescuers from France, Italy, and Austria have been deployed through the EU Civil Protection Mechanism to provide emergency assistance to those affected by the floods.