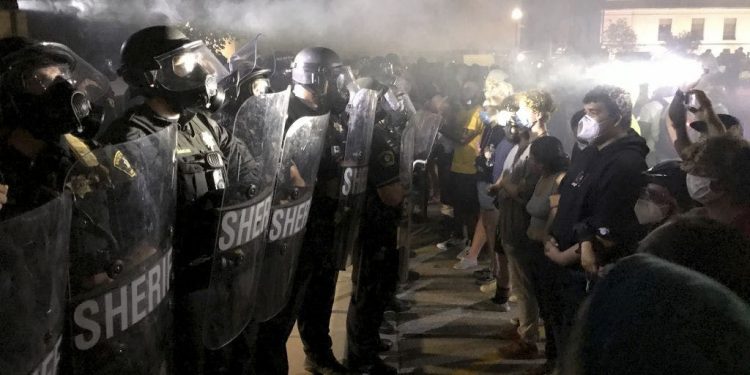 A police officer is being investigated by the Wisconsin justice department after a man appeared to be shot in the back in Kenosha on Sunday.

A video taken by a bystander shows the man, identified by Wisconsin governor Tony Evers as Jacob Blake, walking around a car on a Kenosha street as several officers stand by.

Blake, who is now in serious condition in hospital, is seen attempting to get into the car through the driver’s side door. As he does so, an officer fires. At least seven gunshots are heard.

Crump, who has represented the families of Ahmaud Arbery, Breonna Taylor and George Floyd, African Americans killed this year, said Blake’s family reached out to him for assistance.

“They saw a cop shoot their father,” Crump said on Twitter. “They will be traumatised forever. We cannot let officers violate their duty to PROTECT us. Our kids deserve better!!”

The shooting prompted hundreds to protest in Kenosha, about 40 miles south of Milwaukee. Police used tear gas and several vehicles were reportedly set on fire.

“Tonight, Jacob Blake was shot in the back multiple times, in broad daylight, in Kenosha, Wisconsin,” said Governor Evers, a Democrat.

“While we do not have all of the details yet, what we know for certain is that he is not the first Black man or person to have been shot or injured or mercilessly killed at the hands of individuals in law enforcement in our state or our country.”

In a statement, the Wisconsin attorney general’s office said the department of justice was investigating “an officer involved in the shooting”.

“The involved officers have been placed on administrative leave,” the statement said.

Kenosha imposed a “citywide curfew” over night. By late Sunday, multiple vehicle fires had been set and windows smashed along city thoroughfares as crowds faced off with law enforcement.

Protesters chanted “no justice, no peace” and some appeared to throw objects at officers and damage police vehicles.

In a scene familiar from months of protests over racial injustice around the world following the deaths of Taylor, Floyd and other Black people killed by police, demonstrators headed to the Kenosha county public safety building, which police in riot gear had mostly blocked off. Some officers were positioned on the roof of the station.

Outside, protesters faced off with officers who held plastic shields and batons they occasionally used to push people back. Tear gas was used to disperse groups of people, according to reporters at the scene.

Kenosha police said officers responded to a reported domestic incident at 5.11pm in the city before the shooting occurred.

“Law enforcement immediately provided medical aid to the person who was shot,” the state justice department said in a statement. “Flight for Life transported the person to Froedtert hospital in Milwaukee. The person is serious condition.”