Protests in Thailand over King’s residing in Germany 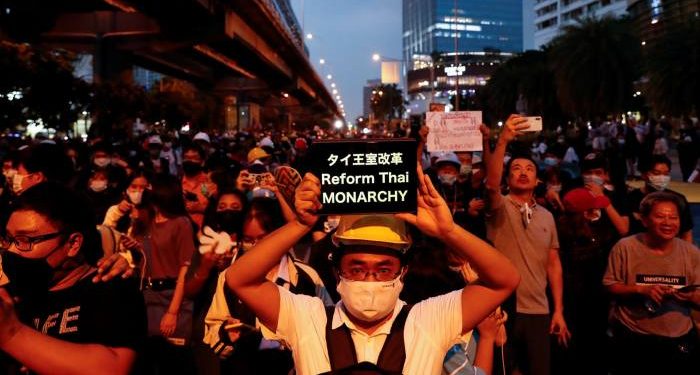 Brussels (Brussels Morning) Thousands of protestors gathered outside the German Embassy in Bangkok on Monday, calling for an investigation into the activities of the King of Thailand Maha Vajiralongkorn in Germany, Reuters reports.

Months of protests in Thailand have put pressure on the monarchy as demonstrators demand the removal of Prime Minister Prayut Chan-o-cha.

They are calling for a new constitution and a reform of the monarchy, in defiance of prison sentences of up to 15 years for criticising the monarchy.

Germany’s Minister of Foreign Affairs Heiko Maas noted that Germany has been keeping an eye on Vajiralongkorn and added that it will take action if it finds anything illegal.

Opposition politicians in Thailand accuse PM Prayut of hiding behind the monarchy, enshrined in the constitution, in order to retain power. Prayut has rejected calls for his resignation, stressing last week that it is his government’s job to protect the monarchy.

In response to almost daily reform protests, royalists have staged counter rallies, which increase the risk of confrontation, AP reports. Prayut warned against change through chaos, pointing out the protesters’ diverse beliefs and calling on the parliament to find a balance between competing views.

Opposition politician Sompong Amornvivat urged the government to amend the constitution and ease tensions by releasing detained protesters and scrapping media censorship. He said Prayut should step down as PM, given that he is part of the problem.

Foreign Minister Maas said the German government was keeping a close eye on developments in Thailand, noting that the people have taken the fight for their rights to the streets. Germany would continue observing Vajiralongkorn in the long term, he added, reiterating that immediate action would be taken in the event of anything illegal occurring.

King Vajiralongkorn has spent a lot of time in Germany over the years, a practice that became an issue after the death of his father, the late King Bhumibol Adulyadej, in 2016. On succeeding his father, he called for and was granted constitutional changes that no longer require him to appoint a regent when he is absent from the kingdom.