Protests in Pakistan end as government agrees to French boycott 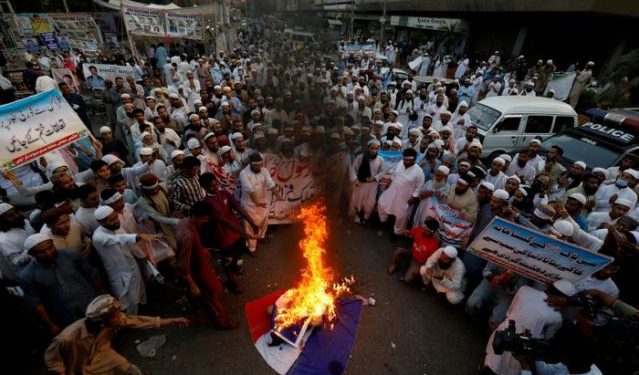 Brussels (Brussels Morning) The Tehreek-e-Labbaik Pakistan called off protests over caricatures of prophet Muhammad Tuesday, noting that the government gave in to their demand for a boycott of French products, Reuters reports. The announcement came after thousands of Islamists skirmished with police on the outskirts of the capital, Islamabad, on Monday.

Party spokesman Ejaz Ashrafi announced that the government had inked the agreement endorsing the boycott, adding that the document had been signed by party leaders, two ministers and a top official. Neither the Foreign Ministry of Pakistan nor the French Embassy in Islamabad offered any comment on the matter.

Pakistan had condemned the reprinting of caricatures of Muhammad. Protests had swept across several Muslim countries in the wake of France’s response to the beheading of Paris teacher Samuel Paty who had shown the caricatures as part of a civics lesson.

According to the agreement between the Islamist party and Pakistan’s government, it is now up to the Parliament of Pakistan to decide whether to expel the French Ambassador from the country within the next three months. In addition, all detained protesters and their leaders are to be released immediately.

Later on Tuesday, the government pointed out the issue was not resolved, stressing that Pakistan has not decided on the matter and concluding the media would be informed about the decision in timely manner.

The Islamist group had blocked one of the main access roads to Islamabad, insisting the government expels the French Ambassador and cuts diplomatic ties with France. In Pakistan, perceived insults against the prophet carry the death penalty, with the country historically reacting violently to incidents considered blasphemous. In the past, such accusations have been known to end in a public lynching.

Trade between Pakistan and France stood at some US$ 800 million last year, according to the State Bank of Pakistan, consisting of approximately $356 million worth of imports and $422 million in exports.

In 2017, the Islamist group called off a similar protest after the government gave in to its demands, with one law enforcement officer and six protesters killed in demonstrations when the group demanded the then Minister of Law and Justice step down.

Last year, leaders of the group were arrested for taking part in violent protests over the release of Asia Bibi, a Christian who had been jailed for blaspheming. Weeks earlier, the government had struck a deal with the group with the aim of defusing the protests, but did not keep any of the promises it made.