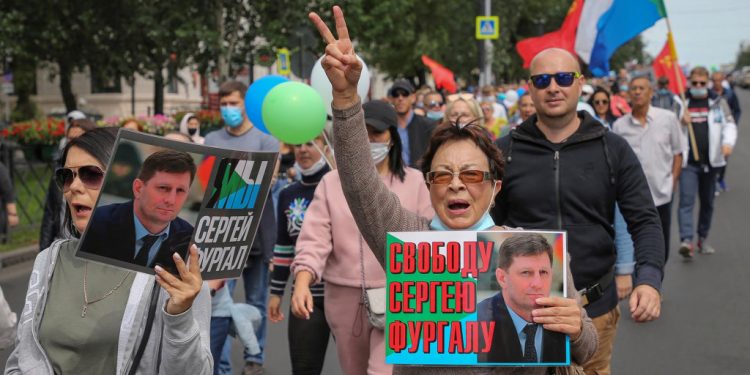 Thousands of people marched through the streets of Russia’s far eastern city of Khabarovsk Saturday to protest President Vladimir Putin’s handling of a regional political crisis and the suspected poisoning of his most vocal critic.

“Putin, have some tea,” protesters chanted as they marched on the city’s main street, in a reference to the case of opposition politician Alexei Navalny who fell gravely ill this month after drinking a cup of tea at an airport cafe, Reuters reported. He remains in a coma in Germany.

Russia launched a probe into what happened to Navalny when world leaders pressured the Kremlin.

“We go and demand a change of government,” one protester tweeted, along with a video of the march, which showed thousands of people carrying banners and a variety of flags, including those of Russia, the Soviet Union, the long-deposed tzar and most frequently, the green-white-blue Khabarovsk region flag.

Residents in Khabarovsk, which is about 3,800 miles from Moscow, have rallied since July 9, when the region’s popular governor, Sergei Furgal, was arrested and taken to Moscow on murder charges dating back 15 years, which he denies, according to the Financial Times. At Saturday’s rally, they carried posters denouncing “repression” and “dictatorship” and demanded that Putin resign and Furgal be released and allowed to return.

It’s the largest and longest-running protest movement since Putin rose to power more than 20 years ago, and also reflects the economic strife in the region.

A member of the nationalist Liberal Democratic Party, Furgal was elected in a surprise landslide in 2018, defeating the Kremlin-backed incumbent. During his two years in office, Furgal has earned a reputation of being “the people’s governor.”

Putin saw him as “too popular,” according to the FT, and documents show the Kremlin came up with a plan to undermine his legitimacy.