Protecting whistleblowers in the EU 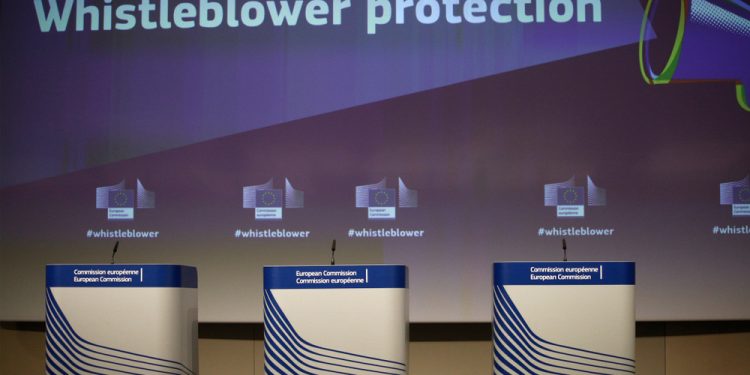 Athens (Brussels Morning) In 2012 Jonathan Taylor, then a worker in SBM Offshore Monaco, revealed that his company had paid millions of Euros in bribes in exchange for lucrative contract awards.

Taylor’s principled act of bravery exposed a scandal that led to hundreds of millions in  fines. However, today, eight years after he first blew the whistle, he is suffering the consequences of retaliation. Arriving at a Croatian airport at the start of a family vacation, Taylor was detained by the authorities and now finds himself facing imminent extradition to Monaco.

Whistleblowers like Taylor expose various types of wrongdoings which is why they are considered to be one of the most effective early warning systems available in the fight against corruption. Any worker in the public or private sector who stands up for fair government and ethical business in the service of the public interest can become a whistleblower by flagging concerns about unethical or corrupt practices and/or breaches of the law that occur in his or her working environment.

A set of basic best practices exists that can help ensure that when a whistleblower acts to safeguard transactional probity and accountability he or she can do so safe in the knowledge that their prospects are protected from any kind of retaliation or repercussions that might impinge on their personal or professional reputation and career.

Beyond auditing, accounting and monitoring, a healthy culture of accountability requires that states as well as public agencies and companies ensure that potential whistleblowers can rely on properly designed, secure channels capable of handling their reports or alerts within an authorised framework specifically set up to deal with such eventualities in a confidential, respectful and responsive manner.

Adequate protection and confidentiality are essential components if any such mechanism is to effectively guarantee that those reporting unethical or corrupt activities are safe from the often harsh retaliatory measures and career-derailing repercussions that can follow such complaints and complainants.

Workers in general but especially those who might be considering raising concerns first need the kind of reassurance that comes from having ready access to comprehensive information about how to proceed with a complaint or an assertion of wrongdoing and, as importantly, what support they can expect at every step of the process. Public availability of legal counseling, social and financial support all play a decisive role in incentivizing people when it comes to speaking up.

A sense of integrity and moral courage are characteristics of whistleblowers who express the truth and hold the powerful to account, acts that can and have saved lives. Certainly, the estimates show, billions of euros might have been saved annually in EU public procurement, if all EU countries had well-functioning whistleblower protection systems.

On 23 October, 2019, recognizing the growing need for comprehensive protection of whistleblowers, the EU adopted Directive 2019/1937 on the protection of persons who report breaches of Union law. The Directive offers a real opportunity, especially for member states with no or minimal legislation, to change course in how they view the role of whistleblowers as frontline agents in the fight against corruption.

A prime objective of the Directive is to harmonise the fragmented and inconsistent legislative regimes among EU member states by establishing minimum common standards for a setting up balanced and effective national whistleblower protection systems. The recommended standards are based on international best practices.

To some extent, the Directive reflects the ongoing work of Transparency International which, as part of a global multiple stakeholder alliance comprising civil society organisations and trade unions, played a key role in promoting its adoption.

However, at the time of writing, 343 days since the adoption of the Directive, very little progress has been made. According to the online transposition monitoring tool  EU Whistleblowing Meter, developed by the Whistleblowing International Network, no member state has transposed the Directive as yet.

True, the process is in progress in 15 countries, but 12 have yet to even start and overall progress is delayed. In countries such as the Czech Republic, the Netherlands, Latvia and Sweden, draft laws are in  some stage of public consultation. Meanwhile, Germany, Finland, Romania, Greece, Slovenia, Spain and Bulgaria have established working groups tasked with producing appropriate draft legislation.

Civil society organisations in Germany, Spain, Greece, and Bulgaria are joining forces with domestic stakeholders, forming ad hoc alliances to press their governments to open the way as soon as possible for a more participatory legislative process. In that vein, the latest Independent Reporting Mechanism (IRM) report for the Greek Action Plan 2019-2021 in the Open Government Partnership (OGP) recommends “effective whistleblower protection” to enhance transparency in both the public and private sectors. For its part, Transparency International Greece stands ready to enter an appropriate OGP commitment with the Greek Ministry of Justice.

Such initiatives require the multiple stakeholders involved in transposing the whistleblower protection Directive to reflect on two urgent necessities – one being of a technical-operational nature, the other being strictly political.

On the technical-operational level, despite all its merits, certain aspects of the Directive have to be approached with caution lest they render its enforcement ineffectual. Of these issues, the most basic and sensitive concerns how best to extend the scope to cover breaches of national law, including national security and defence as well as the handling of anonymous reports.

To put it in a more straightforward way: an effective law should make absolutely clear just which issues a worker may raise concerns about; through which channels and according to what process his/her claims would be investigated; and, how (s)he is going to be protected and where (s)he could turn to in order to seek support. To assist policy makers in dealing with all the technical issues of the transposition, Transparency International has published Practical Guidelines.

The second necessity, concerns political will and commitment. The evidence above suggests the transposition process has stalled. It appears as though governments may be using the COVID crisis as an excuse for delaying and limiting protection.

This paradox demands careful thought and targeted civic action. Open participatory policy making is needed most at times of unprecedented crisis, just like the one the European continent currently faces with the COVID-19 pandemic. National government compliance with democratic standards can only improve through citizen participation.

Whistleblowers exert their democratic right to freely express concerns in a way that bypasses traditional notions of accountability as a means of holding the powerful to account. One year after the adoption of the EU Directive, providing them with the comprehensive protection they need still has a long way to go, but it is within reach.