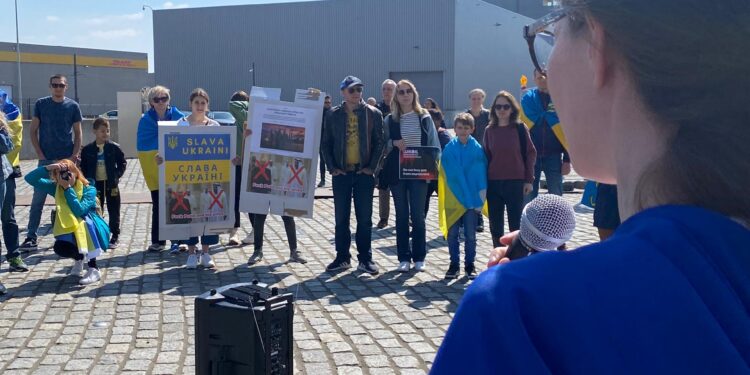 Brussels (Brussles Morning) – Dozens of activists from Ukraine and other European countries demonstrated against the import of gas from Russia and the United Arab Emirates and other Russian friendly countries, against the backdrop of its support for Moscow’s invasion of Ukrainian lands more than two months ago.

The demonstration took place in the port of Antwerp in Belgium, and the participants raised written banners against the UAE and the Crown Prince of Abu Dhabi, Mohammed bin Zayed, who provides a safe haven for the rich of Russia from European and international sanctions.

The demonstrators demanded more international sanctions against Russia, and the imposition of similar sanctions on the UAE to stop its support for Moscow and its shameful positions in support of authoritarian regimes.

One of the  banners at the demonstration said, (Glory to Ukraine, and curse be to Putin and his allies), in reference to Mohammed bin Zayed.
Another banner read: “The UAE provides refuge to the Russians from European sanctions.”


The demonstration reflects the growing manifestations of popular anger in Europe against the UAE, its ruling regime, and the policies it takes to spread chaos and sabotage in the Middle East, support tyranny and oppose democracy.
Yesterday, an investigation published by the French newspaper Les Échos highlighted that the United Arab Emirates has turned into a new refuge for wealthy Russians fleeing international sanctions after Moscow invaded Ukraine.

An investigation by the newspaper, followed by the European Microscope for Middle East Issues, stated that after being subjected to Western sanctions, the wealthy Russians embarked on a race against time to transfer their assets to tax havens.  They use private banks that make their transactions very opaque in the UAE and it is almost impossible to trace the funds.

Russian businessmen, who were sanctioned due to their country’s attack on Ukraine last February, are resorting to leaving Russia for countries that have taken a neutral position on the war, led by the UAE, enabling them to obtain “golden” visas and long-term residence there.

The investigation stated that the Emirate of Dubai has become the meeting place of the richest Russian businessmen, those who necessarily develop in the Kremlin networks – it is impossible to create wealth, and especially not to keep it without at least the approval of Vladimir Putin.
For its part, the British Independent newspaper considered that the relations of the United Arab Emirates and Saudi Arabia with Europe are going through a critical turning point against the background of the two countries’ stances on Russia’s invasion of Ukraine.

And the newspaper highlighted, in a report monitored by the European Microscope for Middle East Issues, that “at a critical juncture in European history, the UAE and Saudi Arabia are taking the side closest to Russia.”

The newspaper warned that the West could not rely on the UAE’s vote at the United Nations to condemn Russia, and during the vote to isolate Moscow from the Human Rights Council, all Gulf countries abstained from voting.


For decades, the West has celebrated dinner with the oil-rich autocrats of the UAE and Saudi Arabia, welcoming them to buy football clubs and even gain access to the political elite while selling them sophisticated weapons and buying gas and oil.