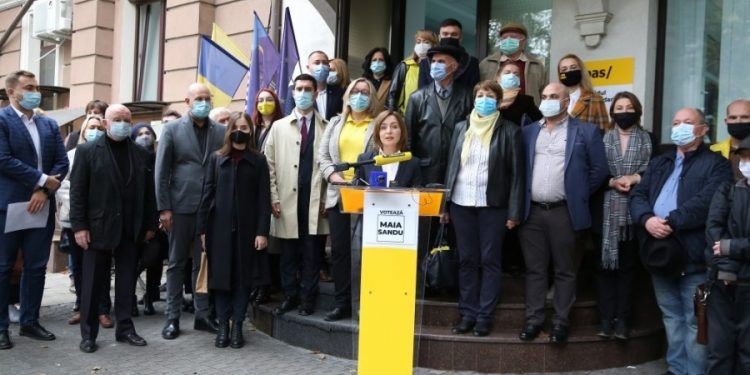 Brussels (Brussels Morning) The pro-EU candidate Maia Sandu has secured a lead against the incumbent pro-Russia President of Moldova Igor Dodon, with the second round of presidential election slated for later this month, DW reported yesterday, Monday.

According to electoral commission data, Sandu has won 36.1% of the vote in contrast with Dodon’s 32.66%, with more than 99% of the ballots counted. The presidential election in Moldova will go into the second round as at 50%-plus of the vote is needed for an outright win, with the pro-EU candidate having pulled ahead of the pro-Moscow incumbent in Sunday’s first round of voting.

The country is divided between a move towards the EU or retaining its Soviet-era relationship with Russia. The two candidates hold opposing views as to the direction the country should take. Dodon wants to maintain the status quo with Russia while Sandu would prefer to get closer to the West and the EU in particular.

Dodon took office four years ago, after scandals about pro-Western options surfaced, Reuters reported Monday. Sandu served as Prime Minister of a coalition government last year, which was toppled months after being sworn in by a no confidence vote.

While Dodon has announced there will be a settlement for the breakaway state of Transnistria next year, Sandu has promised to secure more financial support from the EU. The EU closed a deal on improving economic and political cooperation with Moldova in 2014, but in the ensuing years grew critical of the country’s lack of meaningful reforms.

German Defence Minister Annegret Kramp-Karrenbauer and former EU Council President Donald Tusk have expressed support for Sandu. Their endorsement has been described by Dodon’s supporters as an attempt to destabilise the country. Director of the Russian Foreign Intelligence Service Sergey Naryshkin accused the US last week of attempting to instigate protests against Dodon because of his close ties with Russia. He also accused the US of stirring up revolution in Belarus as Moscow-backed President Alexander Lukashenko cracks down on weekly protests over the disputed presidential election.