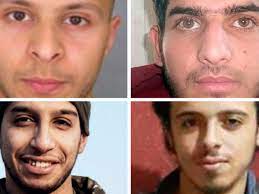 During the trial concerning the Belgian part of the investigation into the attacks of 13 November 2015 in Paris, the federal prosecutor’s office has demanded prison terms of one to two years against four suspects from the circle of friends and acquaintances around Salah Abdeslam, Mohamed Abrini and Ahmed Dahmani. These are Rafik El Hassani, Ayoub Bazarouj, Soufiane El Aroub and Mohamed Rabhioui told BRUZZ.

Rafik El Hassani was the best friend of Brahim Abdeslam, Salah Abdeslam’s older brother, and worked in his cafe.

“Together they often watched Islamic State propaganda videos and El Hassani knew that Brahim Abdeslam was in contact with Abdelhamid Abaaoud in Syria via Skype,” the federal magistrate said. “He has not informed the authorities about this. Had we known, we might have been able to intervene.”

Brahim Abdeslam left for Syria in February 2015, and Rafik El Hassani was supposed to go with him, but his mother put a stop to that by taking his passport.

“Mr. El Hassani now claims that he thought it was a tourist trip to Turkey, but the file clearly shows the contrary,” the federal prosecutor’s office continued. “He knew all too well what the ultimate goal of that journey was. He took Brahim Abdeslam to the airport and said goodbye, thinking they would never see each other again.”

Communication between Syria and Belgium

Ayoub Bazarouj is the brother of Syria fighter Youssef Bazarouj and ensured that his brother could continue to communicate with friends in Belgium from Syria.

“Before that, he opened Facebook accounts and provided Belgian telephone numbers so that Youssef could communicate via WhatsApp,” said the federal prosecutor. “Youssef used those Facebook accounts to send IS propaganda to his contacts in Belgium, and to recruit people for the fight in Syria. The WhatsApp accounts were important to send photos for the false identification papers that had to be made for the trips. to Syria, and to organize, among other things, the crossings of Ahmed Dahmani, Brahim Abdeslam and Mohamed Abrini from Turkey to Syria.”

According to the federal prosecutor, Ayoub Bazarouj also played an intermediary between his brother in Syria and various suspects in Belgium.

“He spends the evening of November 13 in a café in the company of Ahmed Dahmani,” the federal magistrate said. Surveillance footage shows the two embracing and congratulating each other just as the first explosions at the Stade de France sound in Paris.

Soufiane El Aroub and Mohamed Rabhioui also belonged to the same circle of friends and, according to the federal prosecutor’s office, were therefore perfectly aware of the radicalization of the various parties involved.

“They supported their friends in that radicalization and were clearly radicalized themselves,” it said. “They were in close contact with Ahmed Dahmani in Belgium, and kept in touch with Youssef Bazarouj in Syria via Facebook. Bazarouj sent Rabhioui more than 70 messages via Facebook, but Mohamed Rabhioui’s replies have been deleted. The same goes for the more than 1,600 messages that Rabhioui had exchanged with Ahmed Dahmani via Facebook between February and November 2015. Those, too, have been largely deleted.”

When Ahmed Dahmani travelled to Syria in February 2015, it was Mohamed Rabhioui who made sure he had credit and was able to get in touch with Brahim Abdeslam, the federal prosecutor’s office said.

“When Ahmed Dahmani tried to flee to Syria after November 13, it was Soufiane El Aroub who took him to Schiphol in the middle of the night. Dahmani sent both passport photos of themselves, which would find their way through them to the people Dahmani gave a fake Syrian passport.”

On Monday, the federal prosecutor’s office will charge the five remaining suspects.