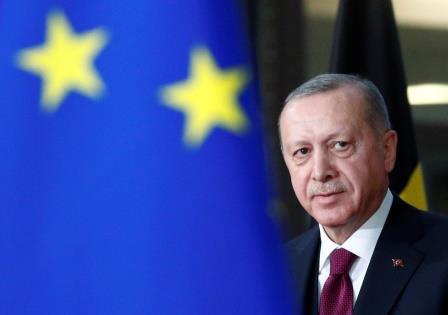 Brussels (Brussels Morning) Turkey’s President Recep Erdoğan has stated that Ankara sees its place in the EU, while calling on the bloc to fulfil its promises about refugees and about Turkey’s accession bid, Kathimerini reported yesterday, Sunday.

Erdoğan’s message comes after the EU considered imposing sanctions against Turkey because of the country’s controversial hydrocarbons exploration activities in contested waters in the Eastern Mediterranean and ahead of next month’s scheduled EU summit. Turkey sees itself as an integral part of Europe, Erdoğan insisted, that is, unless the bloc forces Ankara to look elsewhere.

He called for improving cooperation and reiterated that the EU should live up to its commitments to Turkey, including membership of the bloc and dealing with the issue of refugees. Turkey applied for EU membership in 1987 and some four years ago signed an agreement with the bloc on managing the flow of migrants to the EU.

Turkey’s application to join the EU was effectively suspended over claims of democratic backsliding. Both sides have accused each other of failing to implement the refugee agreement fully. Tensions rose between Turkey and the EU in the past summer, when Ankara sent the Oruç Reis research vessel to conduct seismic surveys in disputed waters in the Eastern Mediterranean.

Friction between Turkey and the bloc intensified in recent months in a war of words between Erdoğan and French President Emmanuel Macron as well as disagreements concerning Turkey’s foreign policy in Cyprus and Azerbaijan.

EU leaders are to discuss Turkey’s exploration activities in disputed waters at the EU summit in Brussels on 10-11 December. Germany’s Minister of Foreign Affairs Heiko Maas called on Ankara last week to stop what he termed its provocations in the Eastern Mediterranean or else face sanctions, while the EU High Representative for Foreign Affairs and Security Policy Josep Borrell warned relations between the bloc and Turkey were approaching a turning point.

President Erdoğan sent his Presidential Spokesman İbrahim Kalın to Brussels on Friday as part of efforts to improve relations with the EU. In recent weeks, Erdoğan announced judicial and democratic reforms to accompany a proposed shift in economic policy.

However, Turkey has also announced extending the exploratory mission of the Oruç Reis in the area of dispute in the Eastern Mediterranean until 29 November, which could add to current tensions, Reuters reported Sunday. Erdoğan dismissed the EU’s objections about Turkey’s exploration activities, saying they “do not reflect history, law and reality.”