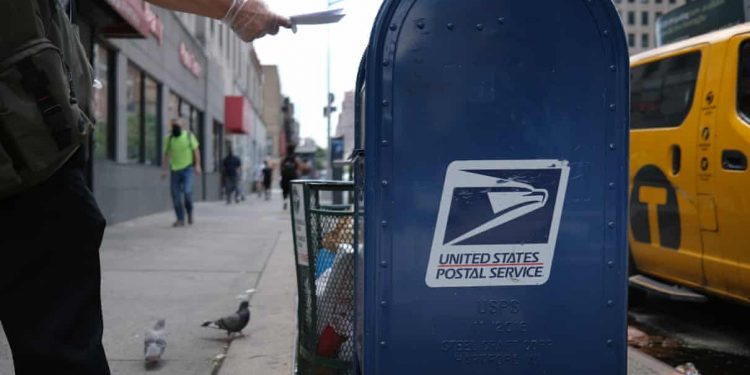 A former top official at the United States Postal Service (USPS) has warned that recent changes at the agency, now led by a Trump ally, could “disenfranchise” voters as they are implemented just months ahead of an election in which a record number of Americans are expected to vote by mail.

Amid reports of significant mail delays, Ronald Stroman, who stepped down earlier this year as the second in command at USPS, said he was concerned about the speed and timing of changes that appeared to be implemented after Louis DeJoy, the new postmaster general, took office in June. USPS faces a financial crisis and every postmaster general is interested in cost savings and efficiency, Stroman said, but the question was how to balance those changes with the public’s needs.

“The concern is not only that you’re doing this in a pandemic, but a couple of months before an election with enormous consequences,” said Stroman, now a senior fellow at the Democracy Fund. “If you can’t right the ship, if you can’t correct these fast enough, the consequence is not just, OK, people don’t get their mail, it’s that you disenfranchise people.

“Making these changes this close to an election is a high-risk proposition,” he added.

Some delays this year have been because USPS workers have been unable to work during the Covid-19 pandemic. But fears increased after DeJoy, a major Trump donor with no prior USPS experience, took over the agency. Shortly after he started at the postal service, the Washington Post and other news organizations obtained internal documents saying the agency was prohibiting overtime and that postal workers should leave mail behind at processing plants if it would cause them to leave late.

Philadelphia residents have reported going upwards of three weeks without mail and postal workers told the Philadelphia Inquirer mail was piling up in local offices. Veterans and employees of the Department of Veterans Affairs have reported mail delays in fulfilling prescriptions. In Minneapolis, USPS temporarily stopped mail-delivery to a high-rise building, home to many low-income and immigrant residents, over concern of Covid-19 spread. In April, some Wisconsin residents reported never receiving ballots they requested for a statewide election. Democrats in Congress have opened an investigation into the delays and asked the USPS inspector general to probe the matter as well.

“I mean come on, we’ve got a pandemic, you’re social distancing, people are calling in sick, you’re going to cut out overtime now? That just makes no sense,” Jamison said. “It’s unconscionable what they’re doing.”

David Partenheimer, a USPS spokesman, said there was no blanket ban on overtime. The agency declined to say whether employees were being instructed to leave mail behind.

There is concern the delays could last into November and disenfranchise many Americans. The majority of US states require absentee ballots to arrive by election day, regardless of when the voter puts them in the mail, in order to be counted. USPS has long advised voters to put their ballots in the mail a week ahead of election day to ensure they arrive in time to be counted (some states continue to allow voters to request a ballot up until days before the election). At least 65,000 ballots were rejected in primaries this year because they arrived too late, according to NPR.

USPS denies it is slowing down the mail and DeJoy said the agency had “ample capacity” to deliver mail ballots on time. “While I certainly have a good relationship with the president of the United States, the notion that I would ever make decisions concerning the Postal Service at the direction of the president, or anyone else in the administration, is wholly off-base,” he said on Friday at a meeting of the USPS board of governors.

There is also some concern about the cost different states will have to pay to send ballots. Some states send ballots as marketing mail, which is less expensive than first class mail and has an expected delivery time of three to 10 days (first class mail is typically delivered faster). In the past, USPS has quickly moved official election mail regardless of the class of service, but in recent weeks the agency has signaled it will not expedite election mail and election officials will get the service they pay for.

Some Democrats have suggested this amounts to a USPS threat to raise postage on mail-in ballots, a characterization USPS strongly disputes.

“There are currently no pending changes to the rates and classes of mail impacting ballots,” Martha Johnson, a USPS spokeswoman said in a statement. “The baseless assertion that we intend to raise prices in advance of the upcoming presidential election in order to restrict voting by mail is wholly without merit, and frivolous. The Postmaster General and the organization he leads is fully committed to fulfilling our role in the electoral process.”

While Stroman agreed the agency had capacity to handle the volume of mail-in ballots, he said DeJoy should make it unequivocally clear that mail-in ballots need to be delivered consistent with USPS delivery standards and be transparent about how the agency was going to address apparent delays ahead of the November election.

“I would like him to say to the employees, ‘This is a priority to me, and I expect 100% of the ballots that we have be processed and delivered consistent with our service standards,’” he said. “Just making that statement, I think, would be important to send a signal to the workforce [that] that is your expectation and that you’re going to put the resources in to make sure that happens.”

Art Sackler, manager of the Coalition for a 21st Century Postal Service, an industry group that represents heavy mailers including Amazon and eBay, said he had heard a “mixed bag” from businesses over the last few weeks, some of which have reported delays. He questioned why the agency was moving ahead with the changes now.

“If there’s a takeaway from the business side of this it would be that the timing of this is problematic,” he said. “In the teeth of a national emergency, voting is coming up in November, well sooner, their peak season comes up after that. A lot of folks are saying: why not do this in January?”