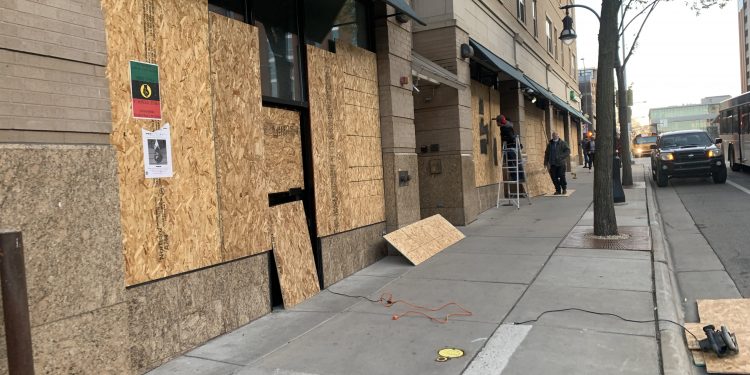 Boarded up businesses in Madison, Wisconsin

Yesterday business people across much of America, including in many American cities, boarded up their windows in anticipation of possible post-election violence. In some cases, they were advised to do so by the police. Business owners certainly have the right to use their judgment to protect their businesses and investment, but these actions are concerning because they implicitly overlook two fundamental truths about politics and political violence in the recent American past, particularly in 2020. First, the overwhelming majority of demonstrations and demonstrators have been peaceful. There have been incidents of looting, but those incidents represent a high profile, but small minority of demonstrations in most cities. Second, the majority of political violence this year has come from the right and from the state. Police killing of George Floyd, Breonna Taylor and others, armed right wing thugs seeking to intimidate duly elected officials in places like Michigan, unidentified state security forces kidnapping people on the streets of Portland, security forces using pepper spray on peaceful assemblies in North Carolina and the persistent violence employed by police against demonstrates in most American cities are just some examples of this.

When the polls close in a few hours, we should all work to prevent violence and keep the peace, but that that also means security forces only use force when absolutely necessary and that white thugs in MAGA caps do not get a pass.