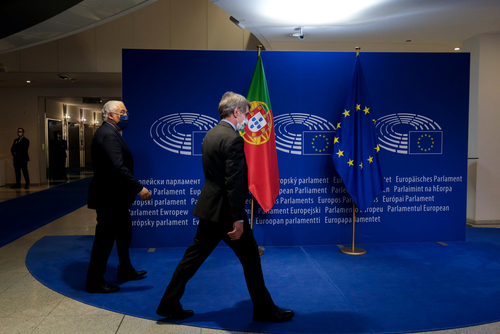 Brussels, Belgium. 20th January 2021. Portugal's Prime Minister Antonio Costa is welcomed by EU Parliament President David Sassoli ahead of a speech for a plenary session of the European Parliament.

The centre-left Socialists (PS) lost the majority in November as their former allies, the far-left former Communists and the Left Bloc, sided with the right-wing opposition in rejecting the budget proposed by Costa’s minority government.

While pre-elections polls showed the Socialists losing their lead over their main competitors, the centre-right Social Democrats (PSD), exit polls on Sunday reflected a surprising reversal of the trend, with PS winning around 41.7% of the vote. PSD ended up far behind, with 29.3% of the vote, while the far-right Chega (CH) came in third, with 7.2%.

The Socialists’ result provided the party with 117 deputies in the 230-seat Assembleia da República, meaning Costa’s party will now have an absolute majority in the country’s unicameral legislature, with no need to try and assemble a governing coalition or to seek support for a minority government – the two scenarios considered most likely, pre-election.

“An absolute majority doesn’t mean absolute power”, Costa said in his victory speech. “It doesn’t mean to govern alone. It’s increased responsibility and it means to govern with and for all Portuguese.”

Costa first came to power in 2015, after the fallout of the 2011-2014 debt crisis. His government presided over a period of steady economic growth, with Costa presenting himself as a champion of a balanced budget, working hard to curb the country’s public debt.

The coming stable government is good news for Portugal’s plans to access the 16.6-billion euro package of the EU’s economic recovery aid. Portugal’s economy, already the poorest in Western Europe, was hit hard by the coronavirus pandemic, and is depending on EU funds to boost its growth.