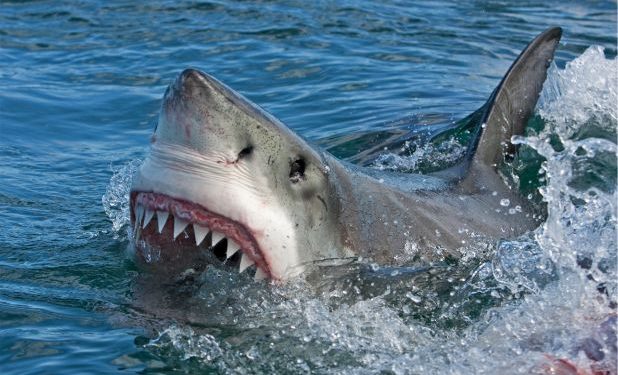 A woman is in a stable condition in hospital as authorities hunt the juvenile great white shark that attacked her on the NSW mid north coast.

The 35-year-old was rushed to Port Macquarie Base Hospital with serious leg injuries after she was mauled off the city’s Shelley Beach about 9.30am on Saturday.

Her husband came to the rescue, jumping on the shark and punching it repeatedly until it let her go.

Mark Rapley told the Sunday Telegraph he just did what anyone would have done.

“The shark was latched on to her leg. I just jumped into the water,” he told the paper.

Witness Jed Toohey said Rapley put his life at risk to save his partner.

“If he hadn’t put his own life at risk, [the shark] would have been strong enough to take her out to sea.”

The woman was later flown to Newcastle’s John Hunter Hospital where she underwent surgery.

She is recovering and in a stable condition on Sunday.

Paramedics were called after the woman was attacked while surfing. Police said she was bitten on the right calf and the back of her thigh.

“The shark wouldn’t release her and so a nearby surfer paddled over and essentially jumped on the shark and started hitting it to make it release,” Surf Life Saving NSW chief executive Steven Pearce said.

A surfer himself, Pearce says it was a “tremendous act of bravery”.

“We’ve had some really serious and tragic shark encounters over the past couple of months along the NSW coastline so to paddle out of your own safety zone, in to an area where you know there is a large shark, I think is amazing.”

Three paramedic crews and a specialist medical team in the Westpac Helicopter responded to the incident, which a NSW Ambulance spokesman said is the third serious shark attack on the north coast in the past few months.

Beaches in Port Macquarie remain closed as authorities work to track the young shark which is thought to measure between two and three metres in length.

There have been five fatal shark attacks in Australian waters in 2020.

One of them was in Western Australia in January, when experienced diver Gary Johnson, 57, was taken near Cull Island, close to West Beach in Esperance.

In July, a 10-year-old boy suffered shock and cuts when a shark ripped him from a fishing boat about 5km offshore from Stanley in north-west Tasmania.