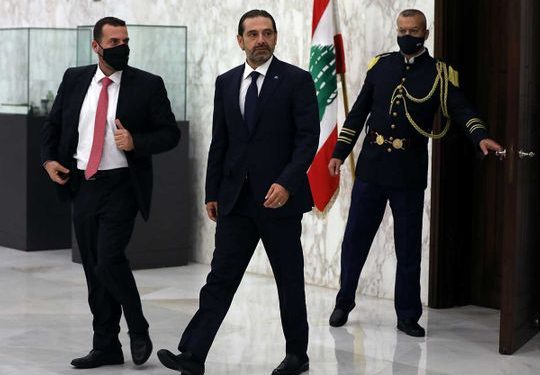 Lebanon’s attempts to form a new government have been hampered by the country’s complex, sectarian-based political system.

After the August explosion in the Port of Beirut, France began pushing for a new political order in Lebanon and launched what came to be known as the French initiative.

The aim was to pressure rival political forces to form a government that would implement sweeping economic reforms, with the international community pledging to withhold financial aid to Lebanon until reforms are implemented.

Human Rights Watch (HRW) has criticised the investigation into the Port of Beirut explosion as having been compromised by political meddling and lack of judicial independence. Yesterday, it called for a UN-led probe to determine the cause and those responsible for the catastrophe.

Hariri was replaced as PM in the wake of nationwide protests against entrenched corruption and a faltering economy a year ago. If he manages to form a cabinet, and he has pledged he will do so quickly given the warnings that this may be Lebanon’s last chance to stop its economic and social decline, it will be the fourth government he has headed in the last decade.

He promised the government will consist of non-partisan specialists dedicated to reforms in line with the French initiative, an announcement welcomed by Lebanese mainstream politicians.

The new government’s priority will be to resume talks with the International Monetary Fund (IMF) on a bailout since the country’s foreign currency reserves are dwindling rapidly.

Hariri’s predecessor Mustapha Adib stepped down one month after being appointed to the post due to his failure to form a government, largely because of sectarian bickering and the insistence of the Shia faction to nominate ministers.

The Shia militant group Hezbollah supports Hariri as Prime Minister-designate, but did not vote for him so as not to appear to be breaking ranks with Aoun’s Free Patriotic Movement, its ally.

The leader of Aoun’s party Gebran Bassil called on Hariri to form a government that represents political factions, even if it does include technocrats.