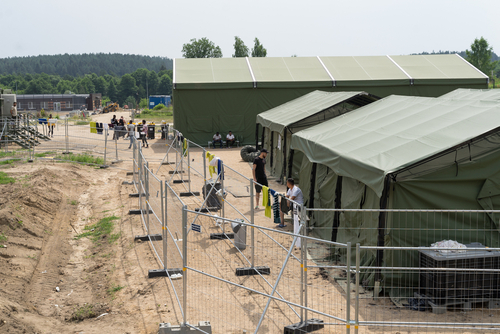 Brussels (Brussels Morning) Polish authorities have reported that two soldiers were slightly injured in a scuffle with migrants at the border with Belarus late on Sunday.

Officials  pointed out that roughly 60 migrants tried to force their way across the border near the village of Usnarz Górny, the second such clash in the last two days, DW reported on Monday.

Poland has strengthened its military presence along the border as thousands of migrants try to cross it illegally from Belarus.

The Polish Border Guard released a video on its website that shows migrants attacking the border fence with branches, with officers saying they were attacked with branches and rocks. A similar fight broke out on Saturday.

Poland currently has roughly 6,000 troops along the border with Belarus and plans to raise the figure to 10,000, according to a Defence Ministry’s announcement on Monday.

All three EU member states that border Belarus – Poland, Latvia and Lithuania – have stepped up border protection as Belarus continues to drop off migrants at the EU border, encouraging them to leave and cross over.

Belarus apparently behind the crisis

According to EU leaders, this policy was put in place in retaliation for EU sanctions against Belarus after the crackdown there on anti-government protests.

The Polish Ministry of National Defence has asked the European Border and Coast Guard Agency to arrange flights to take migrants back to their countries of origin, mostly Iraq, Iran and Syria.

Despite Poland ramping up its order protection, thousands of migrants have entered the country illegally over the last two months or so. Polish authorities point out that migrants frequently pay up to 10,000 euro to human traffickers in hopes of reaching the EU.

Germany is the most popular EU destination, with authorities there reporting about 4,200 arrivals in October.