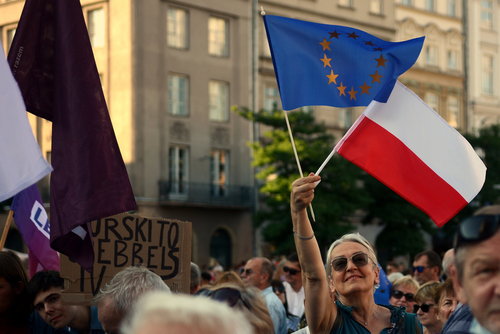 Gowin’s right-wing Agreement party has clashed in the past with the populist right-wing Law and Justice (PiS) party, the senior partner in the ruling United Right coalition, over tax hikes and the proposed law that would force the US-based Discovery group to divest from its majority stake in the largest private TV network in Poland, TVN.

The controversial law, already dubbed the “TVN act”, would formalize a decision that was already being contemplated by the Polish broadcast regulator, in order to prevent any foreign majority ownership of media in Poland.

PiS argues that such regulations are necessary to protect the Polish media landscape from coming under the influence of actors such as Russia and China. However, forcing out a US channel could have consequences. Washington reportedly is thinking about the possibility of moving its troops stationed in Poland to another country in eastern Europe, Romania perhaps.

For Poland, the US is a key ally in the military and political sense, which is why Gowin opposes any possibility of alienating Washington. On Tuesday evening, announcing that his party would be leaving the government with “heads held high”, the former DPM claimed he had found out about his dismissal from the media. It is not yet clear whether all ten of his party’s deputies in the parliament will stop supporting the PiS-led government.

Without the Agreement party, the United Right controls 222 seats in the 460-seat lower house. Therefore, it would need the support of at least nine deputies in order to push the controversial law through. It could turn to far-right parties for support, or try to persuade some of the Agreement party’s deputies to continue supporting the government. If the vote on the law falls through, the government will remain in office until the parliament initiates a no-confidence motion. This means the PiS will do all that it can to ensure that it has the support of the nine deputies required to enable it to retain office.