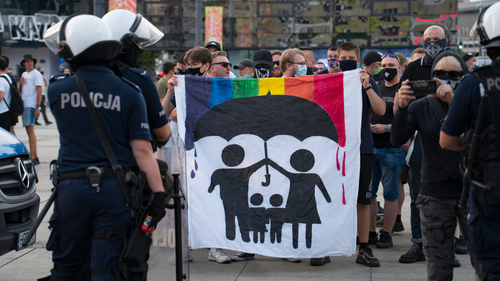 Brussels (Brussels Morning) The Lesser Poland Regional Assembly voted to stay an “LGBT ideology-free zone” despite the European Commission’s warning that the region could lose access to EU funds over it.

Many local government units in Poland decided to become LGBT ideology-free zones, insisting that it presents a threat to Poland’s Christian values, according to Reuters reporting on Thursday.

The assembly voted on the opposition’s motion to revoke the resolution, which was rejected as representatives of the ruling Law and Justice (PiS) voted against the motion.

The regional assembly stressed that the declaration of the zone was misunderstood, adding that the text could be rewritten. Local authorities pointed out that the EC threatened in a letter to deny the region access to EU funds worth more than 2.5 billion euro unless it scraps the declaration by mid-September.

Jan Duda, assembly chair and father of Polish President Andrzej Duda, pointed out “we need to meet and rewrite this declaration, as the one from 2019 has been misunderstood.”

Some proponents of the zones point out that they have nothing against gay people, but oppose what they describe as LGBT ideology and its promotion, especially to children.

The Polish government claims that the country does not have regulations that allow discrimination based on sexual orientation. LGBT ideology-free zones ban the promotion of gender ideology.

The issue has become divisive in Poland, where the vast majority of citizens are Catholic. It has increased friction between the country and the EC, which says the zones are in violation of EU rules that prevent discrimination based on sexual orientation.

Polish MEP and LGBT activist Robert Biedroń commented on the assembly’s decision, expressing belief that “once again, the hatred and anger of PiS turned out to be more important than the good of citizens, and they will suffer the most.”

However, PiS MP Michał Wójcik praised the decision and noted “democracy and self-governance are winning.”