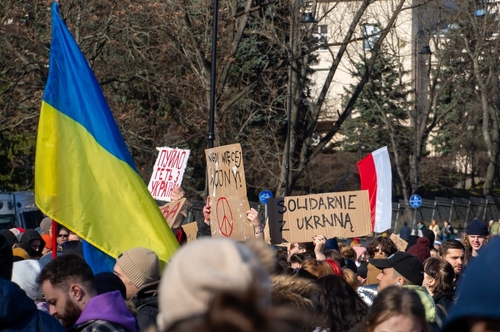 As Russia celebrated Victory Day with a military parade in Moscow and other cities, Andreev was set to commemorate the day by laying flowers at the graves of Soviet soldiers killed in World War II in Poland but was greeted by a mass of anti-war protesters.

Social media footage showed a large number of Polish protesters, some waving Ukrainian flags, chanting “fascists!” at the Russian delegation before one of them threw a red substance – presumably, paint – at the ambassador.

Speaking to Russia’s TASS news agency, Andreev told reporters that neither he nor his team was seriously hurt in the incident, but noted that the embassy will lodge a formal protest with the Polish authorities. “When they recommended that we not hold a larger event, we met them halfway, we didn’t aggravate the situation,” Andreev told reporters.

After the planned “Immortal Regiment March” was canceled – an event during which families of soldiers killed during the World War II walk through the streets holding photos of their loved ones – the Russian embassy initially announced it would not hold the wreath-laying ceremony, after expressing doubts whether the Polish authorities could ensure its safety. The embassy later changed its mind and decided to proceed with the ceremony plans, without offering a clear explanation for its change of heart.

Poland is one of the fiercest supporters of Ukraine in its fight against the Russian invasion ever since it began in February this year. The country is also by far the most popular destination for millions of Ukrainian refugees fleeing from the war, with the UN estimating more than three million – more than half of all displaced Ukrainians – have arrived in Poland since 24 February.