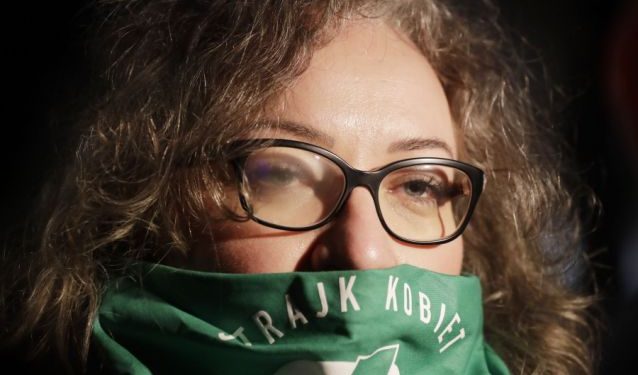 This file photo from Jan.27.2021 shows Marta Lempart, a key leader of the Polish Women's Strike, in Warsaw, Poland. Lempart has been charged with criminal felonies for her role in organizing mass protests during a pandemic. (AP Photo/Czarek Sokolowski/file)

Brussels (Brussels Morning) One of the key leaders of the mass protests in Poland against the near-total ban on abortion in the country has been charged with criminal offences arising from her role in the protests, AP reported on Thursday.

Marta Lempart, a leader of the Polish Women’s Strike movement, said she was formally read the charges at the district prosecutor’s office in Warsaw, where she was charged with insulting a police officer and causing an epidemiological threat by organising protests during the coronavirus pandemic.

The protests were launched in October last year after the constitutional court overturned a law that permitted abortion in cases of foetal defects, a decision that left the country with a near-total ban on abortion. A number of protesters took vented some of their outrage on Catholic Church institutions in the country, because of its perceived influence on the ruling Law and Order (PiS) party.

Lampart told AP the charges represent a ratcheting up of the political pressure her movement has had to contend with. Should she be found guilty of causing an epidemiological threat, the pro-choice activist faces between six months and eight years imprisonment.

The charges against her come at a time when the EU has been increasingly vocal in stating its concerns about the independence of Poland’s judiciary and the erosion of democratic norms. Independent media report being placed under more and more pressure by the PiS government, a claim reflected in the country’s downward slide in the 2020 World Press Freedom Index.