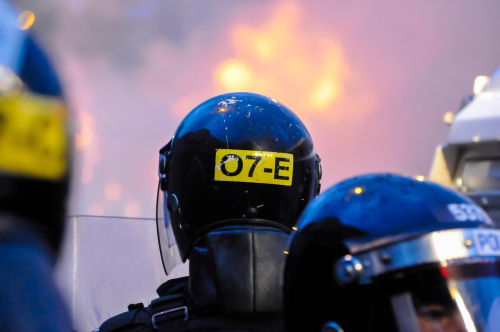 Brussels (Brussels Morning) The Police Service of Northern Ireland (PSNI) reported 41 officers were injured in the riots over the last few days, according to BBC reporting on Wednesday.

As nightly violence from the end of last week continued, rioters threw petrol bombs in Carrickfergus, set an automobile on fire in Derry and injured nine police officers in Ballymena on Monday.

First Minister of Northern Ireland Arlene Foster issued a call on Tuesday to young people urging them to avoid getting involved in violence since doing so would earn them a criminal record.

She noted that the PSNI senior management had lost the trust of the public over the decision not to charge politicians who attended a recent funeral in breach of prevailing pandemic control restrictions.

“It is right that people speak out, but it is right that we say to those young people that two wrongs don’t make a right”, Foster said, adding that she had broached the issue with the head of the Police Federation for Northern Ireland.

Some 80 loyalists protested peacefully in Larne on Tuesday evening, as police observed the demonstration.

Acknowledging existing tensions across communities, Beck said that violence against police and the public cannot be justified.

“When our officers have arrived to deal with situations they are met with petrol bombs, debris, wheelie bins and that takes a degree of orchestration – which is evidence this is not spontaneous”, he observed.

He pointed out that the rioters have shown no regard for the safety of others and said it was “extremely fortunate no one was seriously injured, or worse.