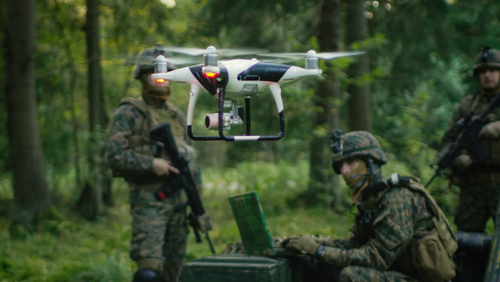 Brussels (Brussels Morning) Polish President Andrzej Duda met with his Turkish counterpart Recep Tayyip Erdoğan in Ankara on Monday, to discuss security cooperation in the context of NATO and to sign an agreement on the purchase of combat drones, Polskie Radio reported.

Polish Defence Minister Mariusz Blaszczak previously announced that Warsaw intended to purchase a flight of Turkish-made combat drones, designed to be armed with anti-tank projectiles. Without disclosing the value of the deal, Blaszczak noted that the first of the 24 Bayraktar TB2 drones would be delivered next year, in a deal that was struck without a public procurement process.

Turkey’s military industry has reportedly grown to the point where it is the world’s fourth-largest drone producer. To date, Baykar, its drone production company, has sold its Bayraktar TB2 armed drones to Azerbaijan, Ukraine, Qatar and Libya. In March, Erdoğan claimed that Saudi Arabia had also expressed interest in that line of drones.

Production suffered a moderate setback in April, when Canada scrapped its exports permits for selling drone technology to Turkey, after evidence emerged that its equipment was used by Azeri forces fighting the Armenians in the enclave of Nagorno-Karabakh. The Canadian exports mostly consisted of drone camera systems.

The Turkish state-controlled Anadolu Agency says the country’s “cutting-edge drones” have been effectively used over the years in cross-border, “anti-terror” military operations, citing a number of past operations to “liberate its Syrian border from terrorist entities.”
The Polish-Turkish meeting comes ahead of NATO’s upcoming summit in Brussels. It signifies a warming of relations between Warsaw and Ankara a week after the European Parliament overwhelmingly voted to freeze the accession process with Turkey due to the country’s aggressive policies and appalling human rights record.