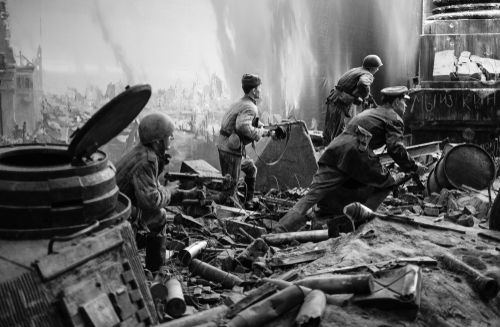 Moscow, Russia, 13.09.2018: Exposition of the capture of Berlin by Soviet troops in the Museum of the great Patriotic war.

Jarosław Kaczyński, head of the ruling party Law and Justice (PiS), made the announcement at the release of a report on estimated costs of Nazi occupation, according to France24 reporting on Thursday.

The reparations report was released on the 83rd anniversary of the start of WWII.

Speaking at the presentation of the report, Kaczyński noted “we not only prepared the report but we have also taken the decision as to the further steps.”

“We will turn to Germany to open negotiations on the reparations,” he announced and predicted that it will be a “long and difficult path.”

PiS announced plans to seek reparations for WWII when it came to power in 2015 and work on the report started in 2017. According to PiS, Germany has a “moral duty” to compensate countries occupied in the war.

Germany previously rejected the idea, reminding that Poland, at the time under communist rule, dropped its reparations claim against East Germany in 1953.

The Polish government rejected Germany’s argument, stressing that the move was made under pressure from the USSR.

“Germany has never really accounted for its crimes against Poland,” Kaczyński reminded and added that many war criminals continued to live in impunity in Germany after WWII ended.

He stressed that the German invasion caused significant damage to Poland, adding that it was “unbelievably criminal, unbelievably cruel and caused effects that in many cases continue to this day.”

Kaczyński expressed belief that the German economy is capable of paying reparations and concluded that the move would pave the way for “true Polish-German reconciliation.”

Arkadiusz Mularczyk, Polish MP and head of the reparations report team, pointed out that it is not possible to place a financial value on roughly 5.2 million deaths caused by Nazi occupation.

Speaking on Thursday on Westerplatte peninsula in Gdansk, the location of the first battle of WWII, Polish President Andrzej Duda described the war as “one of the most terrible tragedies in our history.”

Dietmar Nietan, German MP and government official for German-Polish cooperation, pointed out in a statement that 1 September “remains a day of guilt and shame for Germany that reminds us time and again not to forget the crimes carried out by Germany.”

He concluded that the Polish offer of reconciliation is “the basis on which we can look toward the future together in a united Europe.”