Poland could split from EU over veto 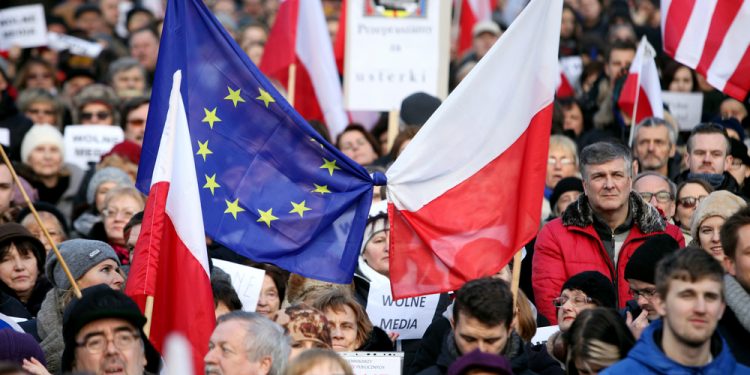 The demonstration of the Committee of the Defence of the Democracy KOD for free media /wolne media/ and democracy against PIS government. Cracow , Poland

Brussels (Brussels Morning) Polish opposition politician Borys Budka warns that the government’s vetoing of the EU governance clause could cause the nation to split from the EU, DW reports.

The Polish parliament joined Hungary last week in adopting a resolution to support the government’s plan to veto the bundle, a package comprising the governance clause, the EU’s long-term budget and the emergency aid fund. The long-term budget and the emergency aid fund are worth some 1.8 trillion euro, with Hungary and Poland threatening to veto the bundle if Brussels insists on including the governance compliance conditionality clause in the deal.

Morawiecki notes that Poland could secure money by issuing bonds. However, this would not be as affordable as the EU proposal. Unless EU member states reach an agreement by 10 December, a provisional budget will come into force, which would force Poland to borrow at higher interest rates.

Morawiecki warns that the governance clause could be used arbitrarily and for political reasons, with Hungary and Poland stressing that the wording of the proposal is unclear. On the other hand, Brussels insists the clause would only apply to violations of democratic principles that involve misuse of EU funds.

An unnamed attorney in Warsaw stresses the importance of making the link between access to EU funds and respect for the bloc’s democratic standards legally watertight. The attorney warns that the exact wording of the rule could have potentially far-reaching implications for individual beneficiaries including civic organisations and Erasmus Programme students.

Milan Nič, head of the Robert Bosch Centre for Central and Eastern Europe, Russia, and Central Asia, points out that while what Poland is doing “is totally legitimate,” the country’s approach to contentious issues causes friction with the EU establishment in Brussels. Nič concludes that a split between Poland and the EU is next to impossible but notes that the core of the bloc could bypass Hungary and Poland.

On Thursday, Jarosław Gowin, the Polish Minister of Development, Labour and Technology, declared that Poland would be willing to withdraw its veto if Brussels were to add an explanatory declaration to the governance clause.