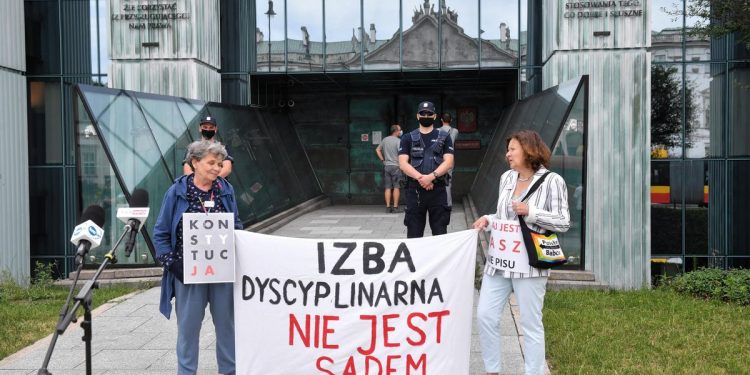 Brussels (Brussels Morning) Poland has agreed to dissolve the Supreme Court Disciplinary Chamber in a letter delivered to the European Commission just before the deadline to do so that expired on Monday.

The European Court of Justice (ECJ) had ruled that the Disciplinary Chamber jeopardises the rule of law and judicial independence, ordering Poland to dissolve it, according to Bloomberg reporting on Tuesday.

In the letter, the Polish government pointed out that it is planning to adopt new rules for disciplining judges, stressing that it will continue to implement judicial reforms. It added that the EU does not have jurisdiction to interfere with how Poland organises its justice system.

Reforms to continue this year

The next round of judicial reforms is to start in the coming months, with the Polish government stressing that reforms will continue “in the area of judges’ responsibility.”

The EU threatened to limit Poland’s access to EU funds if the member state does not implement the ruling of the ECJ to dissolve the chamber, with critics claiming that the ruling is politicised.

Prime Minister of Poland Mateusz Morawiecki is hoping that EU-financed infrastructure projects will help to keep the ruling coalition in power after it lost its parliamentary majority last week.

Jarosław Kaczyński, president of the ruling Law and Justice party, announced earlier this month that Poland was planning to dissolve the Supreme Court Disciplinary Chamber and present plans for a new system for disciplining judges next month, according to Reuters reporting on Tuesday.

In its response to the EC on Monday, the Polish government announced it would submit a motion to revoke ECJ’s interim measures on the disciplinary chamber.

“Poland will continue reforms of the judiciary, also in the area of judges’ answerability, aimed at improving the efficiency of this system,” the government concluded in its response to the Commission.