Pink Cloud, the Brazilian film that prophesised the pandemic 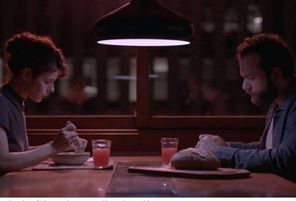 Rome (Brussels Morning) During the presentation of her first feature film at Belgium’s Moov festival (19 April-2 May 2021), the young Brazilian director Iuli Gerbase wanted to clarify a significant point: the film was actually written and scripted about four years ago. It was then shot and distributed before the sudden, unexpected outbreak of the pandemic, in 2019. This, the director keenly points out, is pure coincidence. The clarification is significant if one glances even briefly at the apparently simple plot. Were it not for our recent dramatic past, it could have resided purely with the science fiction genre.

In an alternate reality Brazil, a soft pink cloud envelops an entire city. The cloud is not just a beautiful meteorological phenomenon; it is dangerously toxic threat of unknown origin that is capable of snuffing out human life within ten seconds. The arrival of the cloud marks the beginning of the love story between Giovana (played with intesnsity by Renata de Lélis) and Yago (Eduardo Mendonça). They meet one evening and, carried away by passion, find themselves on the terrace of Giovana’s mother’s house; only in the morning, awoken by a disturbing announcement, are they forced to enter the flat and barricade themselves in, with no way out.

The two look at each other dumbfounded, but with the certainty that the forced cohabitation of new lovers won’t last long. However, the government has to send them supplies via a huge tube’ food, medicine and basic necessities are passed to them this way.

They do all of this within the same house, with no possibility of release, puncutated by video calls that allow celebrations with friends and relatives, and countless telephone conversations to maintain outside human contact. But even these moments of virtual although negligible happiness degenerate into a dreary and depressing routine: Giovana’s younger sister becomes the victim of her stepfather’s vilent and incestuous attention. Her best friend Sara, succumbs to extreme isolation that neither psychotropic drugs nor the company of a robot dog can alleviate. Yago, meanwhile, has to deal with the physical separation from his father, who is increasingly isolated as well as deprived of medical and psychological care.

The strong performance of the two protagonists develops over the course of the film and enriches the aesthetic and moral side of the two characters. This occurs within an atmosphere of ever-escalating anxiety, laying bare the destructive impact that the advent of the pink cloud has on human minds and bodies. This allows the blurring between fiction and reality that the director was keen to warn the viewer about. In the end, as Giovana’s dramatic and courageous choice teaches us, it is enough simply to look out of the window  – and wait ten seconds.