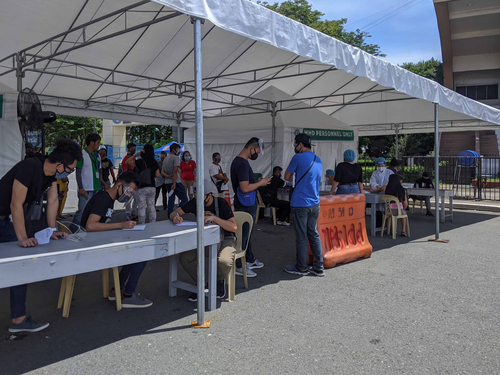 Duterte blamed the EU for the Philippines’ delay in its vaccination drive during a late-night televised address. He claimed the government was “doing everything possible” to purchase vaccines and start vaccinations, but emphasised that the country faced difficulties in securing the supply.

“We are not as powerful as the EU,” Duterte said. “We have money, it’s ready, on standby, but the European Union has held hostage AstraZeneca.” The World Health Organisation (WHO) previously condemned the EU decision to block exports of vaccines produced within its territory in situations where the bloc believes the producer has yet to deliver its contracted supply to the EU.

The WHO announced on Monday that the Philippines is scheduled to get 44 million doses from its Covax programme – a vaccine distribution alliance set up to provide poor and developing countries with he means to tackle the coronavirus pandemic. AstraZeneca, which partnered with Oxford University in developing its vaccine, is also slated to send some of its supply to the Covax programme.

The WHO plans to send up to 9.2 million doses to the Philippines within the first half of this year, n amount that will not even cover vaccinations for 5% of the country’s 106 million citizens. The Philippines, which has recorded more than half a million cases and nearly 11,000 deaths from COVID-19 to date, has also partnered with private companies to purchase vaccines.