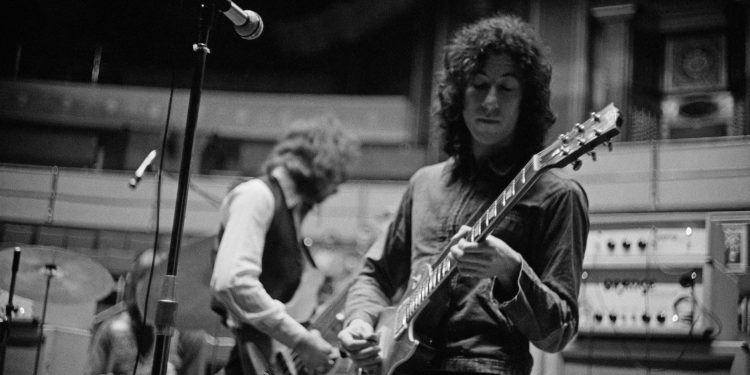 Peter Green, who has died at the age of 73, was one of the great heroes, and great casualties, of the British blues scene, back in its glory days in the late 1960s. Given the seemingly impossible task of taking over from Eric Clapton for John Mayall’s Bluesbreakers, once the guitar hero widely known simply as God had quit to form Cream, Green not only won over Clapton’s followers but dared to move into new directions as a songwriter, as he showed with his eerie instrumental The Supernatural. Even more audacious was his decision to leave Mayall in 1967 to form his own band, Peter Green’s Fleetwood Mac, and steal Mayall’s rhythm section of drummer Mick Fleetwood and bass player John McVie, after whom his new band was named.

Under Green’s guidance, Fleetwood Mac became one of the great British bands of the era – though very different to the later line-ups that would achieve spectacular AOR success after Green had left, when the band moved to the States and recruited Lindsey Buckingham and Stevie Nicks. Green’s band started out playing the blues, and doing so with such energy and emotion that they impressed many of their American blues heroes.

Their first, self-titled album was a top four hit – a major achievement for a blues album – but Green was capable of more than following his heroes Elmore James and BB King. A series of hit singles including Black Magic Woman, Albatross, Man of the World and Oh Well (Part One) showed that he could write poignant, atmospheric instrumentals and thoughtful ballads, or edge towards heavy metal. He was ahead of his time and massively influential, but drugs – especially LSD – put an end to his glory days with Fleetwood Mac. He quit the band in 1970, after a period in which he had disappeared for three days, suggested that his band members should give much of their earnings to charity, and written one of his last great songs, the nightmarish, pained and paranoid Green Manalishi (With the Two-Prong Crown).

He would reappear again in later years, most notably as leader of Peter Green’s Splinter Group, but his four-year spell as one of the world’s great musicians was over by the time he reached his mid-20s. But it had been enough to give him legendary status, and to be honoured in February this year with an extraordinary concert at the London Palladium – Mick Fleetwood and Friends Celebrate the Music of Peter Green – which attracted a celebrity line-up that included everyone from John Mayall to David Gilmour, Pete Townshend, Christine McVie, Kirk Hammett and Steve Tyler.

Green was special for his innovation and songwriting – and his distinctive guitar style. Born Peter Greenbaum in the East End of London, he had started out listening to Hank Marvin of the Shadows as well as the blues heroes. His aim, he once said, was to “express as much as he could in the music, playing as few notes as possible”. He was interested in expressing emotion in the songs, rather than showing off how fast he could play, and in the process he gave space and freedom to other members of the band, which included a rhythm section that also adopted a “less is more” approach.

The debut, self-titled Fleetwood Mac album (the one with a dog, a dustbin and garbage on the front cover) was very much a collaboration with a second guitarist and singer Jeremy Spencer, an Elmore James fan who showed off his slide work on James’ upbeat Shake Your Moneymaker. Green’s own compositions on that album included the brooding I Loved Another Woman, which demonstrated his fluid, thoughtful guitar work, while Looking For Somebody was a reminder that he was also a fine harmonica player.

A second 1968 album, Mr Wonderful, included another powerful, slow Green song Trying So Hard To Forget and a rousing version of the Robert Johnson classic Dust My Broom. In 1969, by when guitarist Danny Kirwan had also joined the band, Fleetwood Mac recorded a third studio album, Then Play On, which included Green’s rumbling Rattlesnake Shake, and the use of strings on My Dream, in which the band were edging towards a softer rock style. But in the same year they travelled to Chicago to record with American blues heroes including Otis Spann, Willie Dixon and Buddy Guy, and provide a reminder that they were a great live band with Live in Boston, which included a powerful treatment of Black Magic Woman.

Green was never as exciting in his later years. When I saw his Splinter Group playing at Dingwalls in Camden Town in 1999, he started off with some adequate blues covers including Otis Rush’s Homework, but then produced a gloriously moody treatment of Albatross. As for the celebration concert earlier this year, that was a far more exhilarating affair. Early Fleetwood Mac songs from the celebrity line-up were interspersed with film clips from the 60s, and there was even an appearance from an in-form Jeremy Spencer – though sadly no sign of Green himself. Thankfully it was filmed, and should provide a suitable tribute to one of the great 60s heroes.