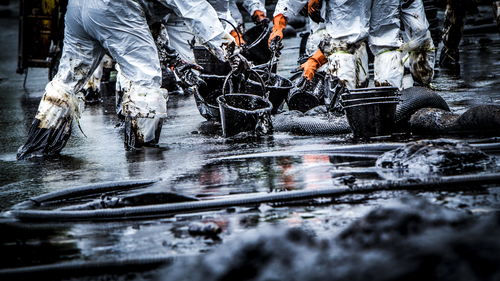 Fishermen protest outside of Peru`s major refinery after tsunami waves from an underwater volcanic eruption off the coast of Tonga causes an oil spill.

Belgium, (Brussels Morning Newspaper) On January 14, a volcano in the Pacific Ocean, close to Tonga, exploded. Experts have described the event as the most powerful eruption in more than 30 years.

Despite being more than 6,000 miles, (9656km) from Tonga, tsunami waves, a result of the volcanic eruption, reached Peru and have caused a major oil spill.

While offloading oil, from ship to refinery, a durable wave caused the boat to unexpectantly move and spill its contents. According to Peru’s environment minister, Ruben Ramirez, approximately 6,000 barrels of oil had dropped into the ocean.

The ocean water surrounding La Pampilla refinery, just outside of Lima, is known to be bursting with marine biodiversity.

It has been estimated, by Peru’s environmental assessment and enforcement agency, that roughly 18,000 square metres of beach on Peru’s Pacific coast have been affected by the spill.

Following the incident, local fishermen gathered outside the facility, which is managed by Spanish company Repsol. Draped in a large Peruvian flag, protesters held signs that read “no to ecological crime” and “Repsol killer of marine fauna”.

Their demands were clear, they wanted to speak with company representatives, but no managerial staff came forward.

Roberto Espinoza, the spokesman of the local fishermen said “There is a massacre of all the hydrobiological biodiversity.” He continued, “losing the sea that feeds us, for not having a contingency plan, they have just destroyed a base of biodiversity.”

According to Juan Carlos Riveros, scientific director in Peru of Oceana, the most affected species are guano birds, seagulls, terns, sea lions and dolphins.  As well as concern for the animals Mr Riverios explained “The spill also affects the main source of work for artisanal fishermen, since access to their traditional fishing areas is restricted or the target species become contaminated or die.”

While work has begun, by Repsol representatives, in clearing the oil from beaches. Jose Llacuachaqui, another local fisherman, said the workers were not clearing the crude that was in the seawater.

While the fishermen wait for the oil to be extracted they struggle to return to work and more marine life die.