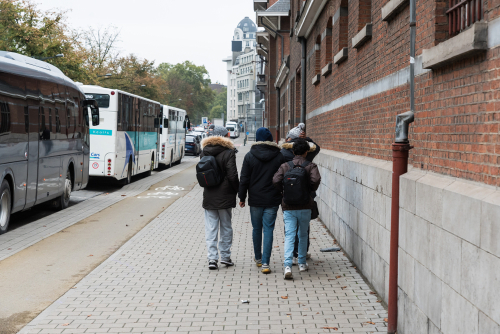 Brussels (Brussels Morning) The group of 180 to 200 undocumented migrants residing in the old building of the KBC avenue du Port in Molenbeek protested on Monday against a threat of eviction. “We will resist,” chanted the Neutral Zone collective.

Undocumented migrants have been staying in rue du Port since August. They had been permitted to temporarily occupy the empty building until the renovation work began. The works were to be held from mid-December, but they have not yet started.

Who are these undocumented migrants?

Since August 2021, nearly 300 undocumented migrants have invested three floors of the former headquarters of the KBC bank avenue du Port.

At night, there are around a hundred sleeping there. Helped by volunteers and associations, they want to draw attention to their situation and claim a right of residence in Belgium.

The municipality of Molenbeek does not intend to dislodge them. However, it will ensure that the security conditions are respected.

A real estate project exists for this building. It provides for its destruction and then its transformation, into housing and a hotel. Until then, the owner of the premises tolerates the occupation.

The collective of undocumented migrants who occupy the former KBC explained to the town that the group is made up of around 250 people during the day, including women and children, but that only a little over 100 adults sleep on the premises. The social service of the municipality will be sent to the site on Tuesday to verify that the occupation is taking place under acceptable conditions, in particular for children.

The occupiers believe they know that the police will evict them by force, but they intend to resist, they warned Monday. More than a hundred people gathered in front of the portal of the former KBC headquarters, shouting: “ Unique solution: regularization”, “ We are all children of migrants ” or “ Solidarity with the undocumented migrants” “.

Some discussions have already been held with the mayor of Molenbeek Catherine Moureaux to find solutions to the stay of undocumented immigrants, according to a spokesman collective Neutral Zone. “The burgomaster offered to accommodate 100 people in different hotels, but we refused. We all want to stay together, ”said Saïd Elouizi.