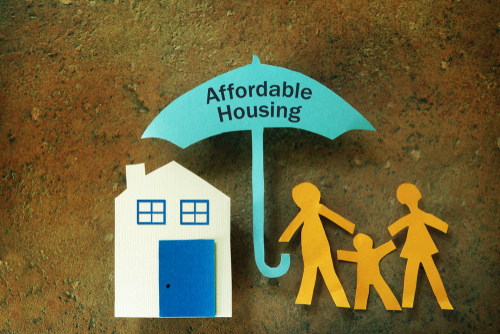 Paper cutout family with house under an Affordable Housing umbrella

Brussels (Brussels Morning) A report on decent and affordable housing reviewed by the European Parliament yesterday urges the EU to move quickly to ensure adequate housing that young people starting out in life can afford and to tackle the scourge of homelessness that is spreading wider by the year throughout the EU bloc.

MEP Kim van Sparrentak (Greens), who is leading the report on behalf of the Committee of Employment and Social Affairs, set the tone, noting that “even before the pandemic started, one in ten Europeans spend more than 40% of their income on housing”. The COVID-19 crisis had aggravated  housing  insecurity, revealing just how precarious the situation had become for many people.

Europe is not only facing a cost-related housing crisis, van Sparrentak observed, but there is also a housing quality “problem”

Will Hayward, the European Youth Forum’s policy officer welcomed the report.  “With sky-high rents in many EU cities and young people taking the brunt of COVID-19 job losses, this is a timely call”, he said.

MEP Estrella Dura (S&D) said it was vital that housing be dealt with as a matter of general economic interest.  “Evictions and homelessness are human rights violations and we need to put an end to this and to housing speculation,” she declared.

In the course of the debate, MEPs also raised issues of energy efficiency and energy poverty, citing the plight of people unable to afford to heat their houses during winter.

Having flagged the housing crisis “for those who have a home”, van Sparrentak intervened later in the debate to direct attention to the “sad reality” of the more than 700 000 people living on Europe’s streets.

“Homelessness has been growing over the last decade in all member states”, the Social Affairs Commissioner Nicholas Schmit agreed. More data and information is needed in order to address the social crisis, he said, noting that “the EU has a key role to support member states”.

Schmit was confident the upcoming social summit in Porto under the Portuguese Presidency would provide an opportunity for politicians and civil society to discuss the need for affordable housing and measures to redress homelessness as they discuss the most pressing social issues affecting the Union.

Spanish MEP Estrella Dura (S&D) cited her recent Social Europe essay advocating for a “social city” in suggesting that the Commission should look at different national examples in seeking to adopt best practices.

“Those cities which better regulate the housing market are those which can offer more in terms of social housing”, she said. In Sweden, for example, rents are managed by local authorities and properties are owned by municipalities or social enterprises, approaches that avoid market speculation while guaranteeing access to housing for all, regardless of their demographics.

Calling on the Commission to take appropriate action, Dura suggested that since “there is not a single answer to the lack of affordable housing, a mix of policies”  might be the right approach to resolving this social problem.