Parliament flags concerns about Turkey ahead of Council summit 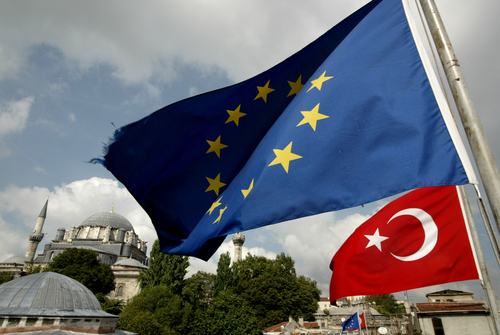 Turkish and EU flags are seen in front a mosque in Istanbul, Turkey 04 October 2005.

Brussels (Brussels Morning) The European Parliament has flagged concerns about Turkey’s conduct ahead of the upcoming European Council meeting (25-26 March), where EU-Turkish relations are on the agenda. MEPs want the Council to send a stern message to Ankara and are asking EU member states to put human rights and the rule of law ahead of geopolitical interests.

Persistent disregard for rule of law and human rights issues in Turkey continues to raise diplomatic tension between the EU and Ankara. The political situation worsened after Turkey’s President Tayip Erdogan withdrew from the Istanbul Convention last week, despite its ratification by the Turkish parliament.

The Convention, signed in 2012, was created to prevent violence against women, protect victims and prosecute perpetrators. It upholds women’s fundamental human rights to a life free from violence.

“Turkey is not free from gender-based violence and withdrawing means condoning the current situation and accepting structural discrimination and violence”, the European Federation of Public Service Unions (EPSU) declared.

“In recent days, we have witnessed a relentless set of actions being taken by the Government of Turkey that seriously affect human rights and rule of law in the country”, MEPs warned.

Also at issue is the incarceration of the Turkish MP from the People’s Democratic Part (HDP), Ömer Faruk Gergerlioğlu, an avid defender of human rights in Turkey, who lost his parliamentary seat and immunity, having condemned the government on social media.

Gergerlioğlu’s case was “another crude example of the dire situation of freedom of speech in the country, the abuse of anti-terror measures to silence any critical voices and of the particular crackdown on the opposition.” MEPs declared the attack on the HDP party an attempt to limit pluralism and political debate.

“We are extremely concerned about the recent omissions of the pressing human rights and rule of law dimension from the agenda of the Council when dealing with the EU’s relationship with Turkey”, MEP Nacho Sanchez Amor (S&D), the Standing Rapporteur for Turkey, exclaimed.

“It was not by chance that Ömer Faruk Gergerlioğlu has been targeted and prosecuted on unfounded grounds”. The move was politically motivated. The intention behind it was to set an example for whoever wants to speak out against the government, the MEP contended.

Turkey’s approach to issues of human rights has been a bone of contention in its relations with the EU for a long time, something that the EU takes into account when considering the country’s request to join the bloc. Ankara, meanwhile, realizes its geopolitical significance to the EU and uses it for influence when bargaining with the bloc, which relies heavily on Turkey to control the influx of migrants into the EU territory.

The political situation will be discussed during the Council meeting on 24 and 25 March. According to Greek media reports, neither Greece nor Cyprus is happy with the European Commission’s recent report intended to pave the way for a more balanced approach between the EU and Turkey.

The Council summit will build on a report by EU High Representative Josep Borrell and the Commission that calls for “modernisation and expansion of the scope of the current EU-Turkey customs union”.