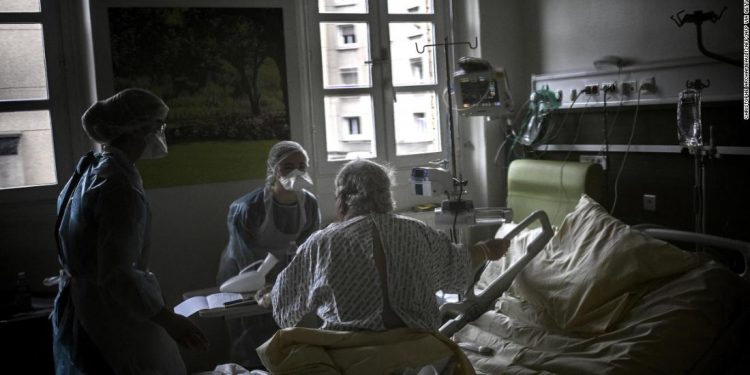 Brussels (Brussels Morning) A chilling opinion piece signed by 41 Parisian doctors warns that the already tightly stretched healthcare system could soon become overwhelmed and incapable of caring for the sick and injured in the hospitals of the French capital, France 24 reports.

The 41 doctors working in hospitals in the Paris region jointly wrote a piece, published in Le Journal du Dimanche on Sunday, in which they compared the current situation in the hospitals with the Bataclan concert hall attack in 2015, in which 130 people were killed and hundreds more wounded by Islamist terrorists.

“We have never known such a situation, even during the worst attacks,” the doctors wrote. “We already know that our capacity to offer care will be overwhelmed. We will be obliged to triage patients in order to save as many lives as possible. This triage will concern all patients, with and without Covid, in particular for adult patients’ access to critical care”.

A separate group of nine critical care doctors writing for Le Monde voiced similar warnings on Sunday. “When just one ICU bed is available but two patients could benefit from it, it consists of deciding which of them will be admitted (and will perhaps survive) and which will not be admitted (and will quite probably die)”, the critical care doctors declared, and added: “This is where we are heading.”

The doctors’ warnings come as France’s President Emmanuel Macron has been defending his decision publicly not to impose a full lockdown this year, despite rising figures. So far, Macron’s government has introduced only limited measures, such as imposing a curfew and a diverse range of other softer measures.

“We were right not to implement a lockdown in France at the end of January because we didn’t have the explosion of cases that every model predicted”, Macron declared last week. “I don’t have remorse and won’t acknowledge failure”.
However, France recorded 42,619 new infections on Saturday, more than eight times Macron’s stated target of 5,000 daily cases, which he set in late 2020. The number of patients in intensive care grew to 4,791, coming dangerously close to the peak of 4,903 recorded during the country’s second wave last autumn.