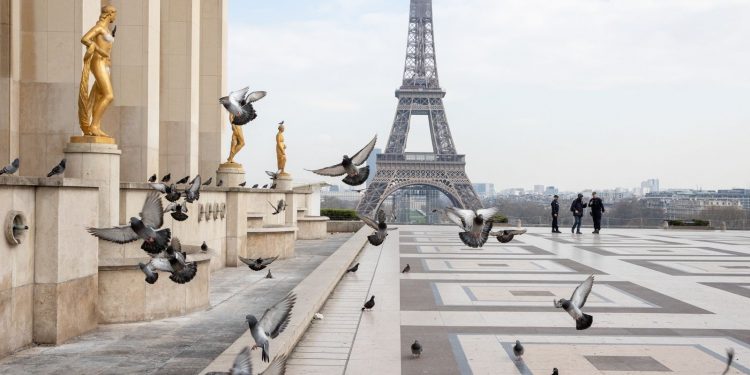 PARIS and the Bouches-du-Rhone area in France have been put on lockdown as coronavirus cases continue to surge.

The French government has declared the city and the area around Marseille on the Mediterranean coast as “red” zones with a high coronavirus infection risk.  The decree gives local authorities the power to limit the circulation of people and vehicles, to restrict the access to public transport and air travel, to limit the access to public buildings and to close some establishments where there is a high risk of infection.

The measure follows a sharp increase in COVID-19 infections in France over the past two weeks.

Paris and Marseille had in recent days already made the wearing of face masks mandatory in busy public areas.

Making Paris and Marseilles red zones could have a major impact on tourism, as it could lead other countries to impose quarantines on their citizens returning from those areas.

It comes as the latest data shows over the past week there has been a 66 percent increase in newly reported cases and a 52 percent rise in weekly incidence rate per 100,000 population, indicating a sharp rise in COVID-19.

The latest 14-day cumulative figures from the European Centre for Disease Prevention and Control show 32.1 COVID-19 cases per 100,000 people in France, compared with 18.5 in the UK.

It comes after the UK placed France on its quarantine list following a surge in cases.

People arriving in the UK from France after 4am on Saturday will be required to spend 14 days in self-isolation.

The conditions will also apply to travellers returning to the UK from the Netherlands, Monaco, Malta, Turks & Caicos and Aruba.

“If you arrive in the UK after 0400 Saturday from these destinations, you will need to self-isolate for 14 days.”

The UK’s ambassador to France, Lord Llewellyn, said it would be ”unwelcome news” for British tourists in France.

He said: “I want to be clear that you are not being asked to leave France immediately.

“You will obviously want to consider how the need to quarantine for 14 days will affect you and your family when you return home.”

The move, which applies throughout the UK, comes after Boris Johnson promised to be “absolutely ruthless” in decisions about imposing quarantine restrictions on countries.

France reported more than 2,500 new COVID-19 infections for the second day in a row on Thursday, levels last seen in mid-April when the country was in the middle of one of Europe’s strictest lockdowns.

Despite the rise in cases, the number of people hospitalised due to the disease continued to fall, having dipped below 5,000 for the first time since mid-March on Wednesday.

Experts say this is because more young people are being infected, who are less likely to need hospital care.