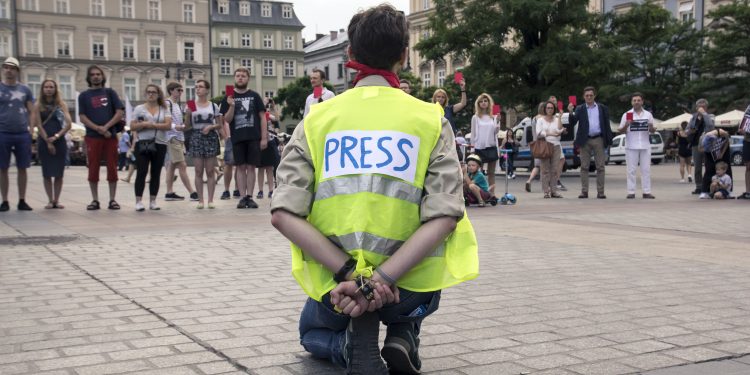 Media freedom has become under intense scrutiny in the EU, following attempts to silence journalists covering the pandemic or migrant crisis. The recently published World Press Freedom Index 2021revealed that journalism is “completely or partly blocked” in 73% of the 180 countries ranked by Reporters Without Borders (RSF).

According to the Index, several countries have tried to “limit the impact of information” on sensitive subjects including the pandemic, by implementing restrictive measures impeding access to sources, or attacking journalists reporting on the pandemic.

According to the European Federation of Journalists, threats to freedom of information during the pandemic have been reported in Albania, Armenia, Azerbaijan, Bosnia and Herzegovina, Croatia, Greece, Hungary, Italy, Kosovo, Moldova, Poland, Romania, Russia, Serbia, Slovenia, Spain, Turkey, Ukraine and the UK.

On the occasion of the World Press Freedom Day, today, the European Parliament is reflecting on the state of the press in the EU. RSF’s Secretary-General Christophe Deloire was invited to present the organisation’s annual report, amid a palpable decay in the media.

“Journalism is the best vaccine against disinformation”, said Deloire , “Unfortunately, its production and distribution are too often blocked by political, economic, technological and, sometimes, even cultural factors”.

In a recent report promoting the protection of journalism and safety of journalists, the Council of Europe asks for “real action for media freedom in Europe”.

The report describes increased physical attacks, harassment and intimidation against journalists, increased media capture in detriment of independent journalism and the criminalisation of journalism, building judicial harassment, misuse of law and defamation.

This year, only 12 of the Index’s 180 countries (7%) can claim to offer a favourable environment for journalism, as opposed to 13 countries (8%) last year, warned the RSF.

The usual leaders of media freedom — Norway, Finland and Sweden — ranking in the top three of the Index, still hail Europe as a region of supremacy in press freedom.

Yet, countries like Hungary (92th), Greece (70th) and Poland (64th) are challenging the bloc’s ideals of press freedom and media plurality.

In Greece, journalists have been harassed or assaulted in an attempt to block them from talking to migrants at the ports and migrant’s camps.

Despite having jumped up two seats in the ranking to 33, NGOs and civil society organisations have criticised the UK for the imprisonment of Wikileaks publisher Julian Assange.

UN Special Rapporteur on Torture Nils Melzer described the British government’s conduct of the Assange’s legal case as a “murderous system” that is being created right “before our very eyes”.

As for Germany, it has been stripped of its “good” classification, having dropped two points, down at 13th in the index. Media pluralism in the country is undergoing “slow but steady erosion” for economic reasons, especially with regards local newspapers.

In recognising the contribution of public service media in upholding freedom of expression, the Council of Europe denounced state media, which are “under pressure” in some member states, as being controlled by authorities who wield “disproportionate influence”, including through funding.

“Emergency measures must not be used as a pretext to restrict the rights of journalists”, commended the Council of Europe.

“In response to the virality of disinformation across borders, on digital platforms and via social media, journalism provides the most effective means of ensuring that public debate is based on a diverse range of established facts”, reinforced the Deloire.