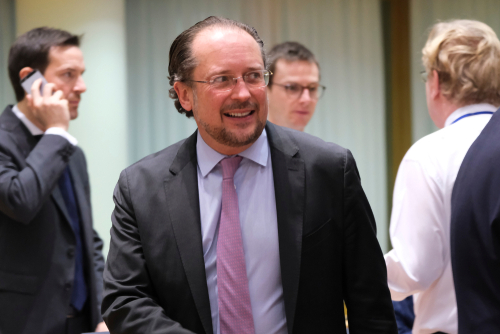 Brussels (Brussels Morning) Austrian Foreign Minister Alexander Schallenberg, from the centre-right People’s Party (ÖVP), was sworn in today as the country’s new Chancellor, following the resignation of his party’s leader, Sebastian Kurz, from the chancellorship in the face of mounting corruption allegations.

After prosecutors opened official investigations into several instances of breaches of trust, corruption and bribery against Kurz and nine of his associates last week, the junior coalition party, the Greens, demanded his resignation as the price of their remaining in the coalition.

However, Kurz, on resuming the routine functions of a sitting member of parliament, will benefit from the fact that, unlike office-holders in the cabinet, MPs enjoy immunity from prosecution, an entitlement Kurz insists he has no intention of using.

Meanwhile, the opposition has rejected Schallenberg, a career diplomat and a relative newcomer to politics, claiming that Kurz will effectively retain the power of government, ruling from the shadows, since the new Chancellor will be acting as his front man. Critics claim that Schallenberg, a close ally of Kurz’s, is unlikely to pursue any policies without the explicit approval of his party chief.

Austria’s President Alexander van der Bellen, when swearing in Shallenberg along with new Foreign Minister Michael Linhart, made clear that the government now needs to regain the public trust that was lost with the launch of the official probe into the corruption allegations.

According to the anti-corruption prosecutors, conservative officials in the Finance Ministry abused state funds in order to pay for manipulated public polling, and to pay for media coverage favourable to Kurz. The suspected mishandling of finances dates back to 2016, when Kurz first sought to take over the leadership of ÖVP. He was ultimately successful and became the country’s youngest chancellor ever after he won the 2017 parliamentary elections.